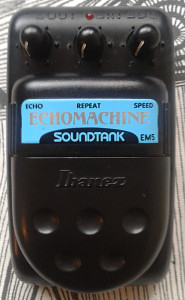 What is it?
Ibanez EM5 Echomachine in plastic enclosure from later soundtank series. Made in taiwan around 1997-99.

The Internet Archive’s wayback machine has a snapshot of Ibanez site from june 1997 and on that page there is a mention the EM5 being the new and exciting pedal in the series of 18 different pedals Yes, 18. So it’s safe to assume that all the existing EM5s were manufactured in between 1996-1999, since all Soundtank production was taken over in 1999 by the next series – the Tone-Loks. In addition to those 18, the rest of the Soundtanks are in fact from the original, metal housed Soundtank series of six different dirt pedals. Namely PL5, TM5, CM5, SF5, CR5 and MF5. Only four of those made it to the plastic series as a continuation, the four being TM5, CM5, PL5 and SF5 (which had it’s model name revised to FZ5). So the latter Soundtank series produced 14 new designs to the bowl and it left out the super good Crunchy Rhythm and super bad Modern Fusion. Sort of like a ski jumping scores. You leave the best and the worst out.. All this should total at 20 different designs. Maybe i should write a Colorless Writings episode about soundtanks at one point. Or maybe even start a new writing series on history of some brands…

Ok. Let’s get back to business. The EM5 Echo Machine is a digital tape echo simulation delay/echo. I got this unit from the bass player of Versus All (huge thanks to Jason!) in perfect, nearly unused condition. Opening the bottom plate up shows your standard modern Soundtank traces. This time somewhat neater work on the joints than most other taiwanese Soundtanks. And the board is pretty crowded. 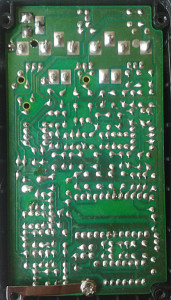 The digital chip responsible for the sounds is Mitsubishi M65831AP. Like many other Mitsubishi chips utilized by Ibanez, this one is too one of those you may find in many karaoke devices. The dual opamps used for buffering and mixing are C4570C, which are not your average choice, but they do perform quite well in this circuit. The schematic for the effect is up at Free Info Society. 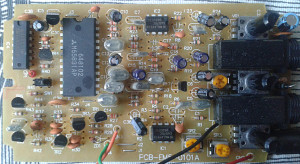 As stated above, the EM5 Echomachine was apparently manufactured only for about two years, which means that the number of unit produced is somewhat low. Lots of maybe’s on that last sentence, but that’s all based on the little information that is available. If this is the case (and it probably is), these units should be quite valuable. At least when comparing to PL5 Power Lead or TS5 Tubescreamer which were the two most selling designs on the series. But then again. The TL5 Tremolo isn’t as valuable as it should be, so why this one should stand out?

How does it sound?
Like an angry tape echo unit gone slightly mad with the tightness. The sound is without a doubt one of the best digital tape echo emulators of its day and it has not been killed by time, not even now. It has tightness that sounds personal. Nice collectible, and most of all, usable unit.