Yeah. I know. it’s december already, but this is the last uncovered chorus pedal in my collection for the moment. I want to cover it now – so that i don’t have to write about choruses for a while… 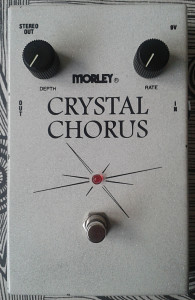 What is it?
Morley CCB Crystal Chorus from Jewel Box series. Made in US around 1995-98. Serial number maimed by velcro (grrrr!).

The aesthetics are heart warming. The box is too big, but the white sparkle coating makes amends. Knob pointers are glowing in the dark and the graphic design reminds me of something 50’s.  Stylish and very neat. Blinking LED for the indicator that shows you the LFO speed is also pleasing. 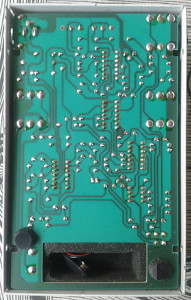 I thought i heard something that wasn’t like on most standard analog chorus designs. Taking a look at the schematic confirms my suspicion. The chip driving the 1024 stage 3207 BBD isn’t your standard timer. As always with Morley, the buffering and mixing is done with a quad opamp. Motorola MC3403 acts as a LFO and the timer for BBD is created with CD4007 and CD4047 CMOS chips. To be honest, i’ve never seen that don before. The stereo output  is just simply splitted and connects only when the first output is in use. It could have been inverted, but then the board would not have been big enough for Morley engineer. 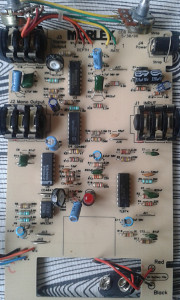 Negative points come from the big box and the rate knob. And a small additional minus for the board layout. The ground strip that connects the left and right side goes under the battery hole of the board. It’s not too convincing way to ground the board.

How does it sound?
Smooth and gets quite flangerish with depth maxed. Feel of the rate knob isn’t perfect as the best part of the sweep is located at last 10 percent of the sweep. Schematic shows that pot to be a log taper one, so it undoubtedly is performing in the best possible manner. If you ever get a chance to play with one, try to place it in front of some massive distortion unit like Boss MD-2. That’ll give you something a lot closer to synth than a guitar. Soundwise, this turned out to be my favourite chorus.