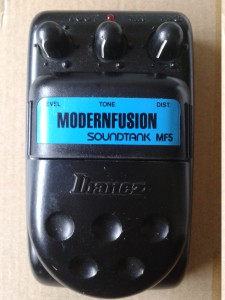 What is it?
Ibanez MF5 Modern Fusion distortion from Soundtank series. Housed in metal enclosure and made in Taiwan in 1989.

Already had the plastic one, but saw this for sale with a reasonable price tag. The switch is in perfect working condition and i believe this hasn’t been opened up before, not even once. Only bad thing about this unit is that it sounds really bad with no real value for me. That may also explain the near mint condition and working switch though. But a collector can’t help himself… Apparently these units were a failure, as the manufacturing seems to be suspended before the series got their own typefaced labels.

Get your mullet out and put your silk shirt on. As the name suggests, the year is 1989. White suit pants and PRS guitars on a sunny jazz festival stage comes to mind. And to me, that’s not too pretty sight. This thing nails the yuppie adult jazz distortion just as it is. Shoulder pads. 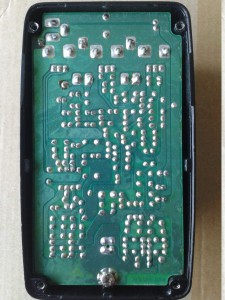 Board traces are modern and quite dull. The schematic is available online and it shows the design having slightly tweaked TS-like first gain stage after the Ibanez standard input buffer. That is follewed by two gyrators and semi-active tone control. Then to a JFET buffer  before volume control and a standard output buffer after that. For those who are capable of coming up with your own mods, i’d recommend to tweak the hell out of those gyrators. Maybe even snip the gyrator transistor drains, so that the full frequncy contect from the clipping amp gets through. I konw. Pretty drastic. But i think you’ll have a hard time if you’re thinking this may be usable without any mods. 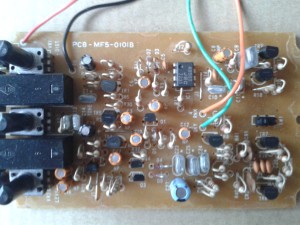 All in all, the frequencies tamed by the gyrators offer stability that’s not very common. From electronic point of view, the filtering is too much. Thus that’s what’s making it the Modern Fusion, the only and the most boring adult jazz distortion there is.

How does it sound?
Surprisingly bad. If i was to dig up one good thing about the adult orientated distortion sound this unit offers, that would be the consistency. The distortion is so squeaky clean that it kills all possibility of sweet harmonic overtones. Once you bend your strings around the 12th, it still remains sterile. Now that’s a feature you don’t run into too often. Treble content is clipped much louder than the bottom, so in best case scenario – playing with hot jazz neck humbucker one can get relatively useful tones. But let’s face it. This is probably the worst design in the whole series. Trumping even The Cyberdrive and the Autowah.