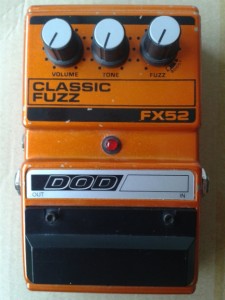 What is it?
DOD FX52 Classic Fuzz, Made in USA in early to mid 90s. Yup. It seems almost like yesterday when boxes of this series were in every young guitarists hands. It’s been 20 years already, but i wouldn’t exactly call it “vintage” for another two decades though.

This model was discontinued in 1998, and my units serial number points to manufacture date being close to first quarter of 1994. It’s not a perfect pedal in any way. The most interesting thing is that this one has the same PCB as FX50. Only a few component values differ and one clipping stage is omitted. There’s a lot of good info available on this circuit on the America’s Pedal site. You can find the schematic hosted at Experimentalists Anonymous, if you want to see it. Schematic shows a few things one would want to mod. Not going into that right now – as i would need another unit in my collection before i would dare to ravage one of these. Things i would do to her would be; adding a diode pair to the feedback loop of LF353, tuning/upping the gain on the tone driver half of that IC and probably doubling the hard clipping diodes and removing the 1n cap taming it. One could also tune the 22n and 10µ caps to their taste of tone control. Maybe even rethink some pot values and tapers. 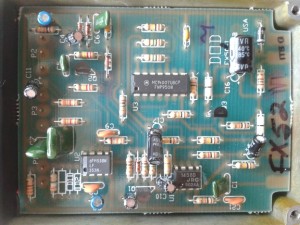 Chips not affiliated with bypass switching are LF353 for the gain and tone stages and JRC1458 as in and out buffers. Also. Note the unconnected components left from LF353. As you can see from the shot above, the model is marked on the board with permanent marker. Here’s another photo that shows what’s under the filter cap: 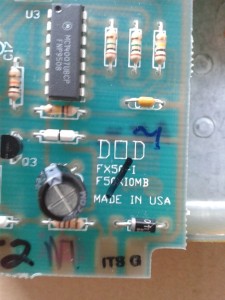 So it’s built on FX50 PCB. According to internet, it seems that there are other models sharing the same board too.

How does it sound?
To be honest. I’ve heard a lot of better circuit designs. Where DOD advertised this with the spiel “The FX52 Classic Fuzz duplicates the sound of the early 60s distortion boxes, such as the Fuzz Face and the Fuzz Tone. A must for musicians looking for a more nostalgic sound.” – I Do not find the resemblence to Maestro or Arbiter fuzzes mentioned. It’s more compressed than Big Muff, while that would be the closest vintage circuit. I still can’t hear the Fuzz in there. It’s much closer to being just muddy distortion than a real Classic fuzz. It has decent output level and better-than-average sustain. Might keep it in my collection, just in case. But i don’t see myself fastening this to my pedal board anytime soon. Or maybe i should mod it after all…  Good thing you can get still these for cheap, at least at the time of writing.