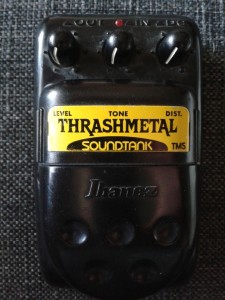 What is it?
Ibanez TM5 Thrashmetal from Soundtank series in plastic enclosure, made in Taiwan around 1994-1996

Serial starting with 184 points to early-mid nineties date due to this being with its own type font. Earlier ones should be with uniform type face and so are the metal cased units. Serial is quite low for the box having its own typeface, so i’m assuming this is one of the first batches of TM5s with this font. Thrashmetal was apparently pretty popular pedal back in its day – and no wonder. It is very doog effect pedal, despite to popular disbelief that Soundtanks suck. They don’t. Period. This, like almost every tank in my collection, needed a new switch. Simple, low cost procedure which will give a new life for the box. Mods? No. This puppy won’t need any to sound good. Dirk hendrik has drawn a beautiful schematic for this. Schematic refers to metal cased unit, so there are some slight changes between later units and the first ones. Mainly the opamp used. 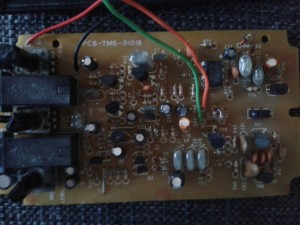 For this unit, the opamp has 6552 413 printed on it, so it is in fact a Panasonic AN6552 – which is cited as Panasonic’s clone of NE5532 in some audio tweaker scenes. Apparently the first versions accomodated JRC4558 chips, but i strongly believe there’s no audible difference. Circuit has some details in common with Proco Rat, the main gain stage and hard clipping included. Rest of the circuit has not that much to do with a Proco design, with its discrete gain stages and active filters and other tricks. Simple, neat and very decent thing to have.

Real nice. In my opinion, this is definitely one of the best designs in the whole Soundtank series. The short sustain with relatively high gain makes this circuit sound exactly like all the great bands that made 80’s thrash what it was at its best. Circuit isn’t metal in the way kids today see metal. It still offers that natural, amp-like super tight, accurate thrash sound, usually associated with 80s-90s Marshall distortions.  It may be worth mentioning that it doesn’t sound like a Rat at all. It sounds like i need to get a skateboard again.