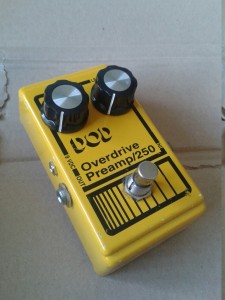 What is it?
DOD Overdrive Preamp 250, 90’s reissue in yellow first series style enclosure. Made in china.

This is one of those boxes that everyone should play with at some point in their life. If for anything else, for the feel of that heavvy duty box. The base design topology is pretty much verbatim with MXR Dist+ and probably a hundred other boxes from end of the 70’s up to today.  There are differences though. And good thing there are. As in my opinion, modern Dunlop made Dist+ reissue with UA741 and Ge diodes just suck. But before anything else. Let’s just open this up and see what’s inside. 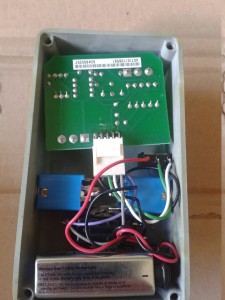 Looks quite modern with neat thin circuit traces and connector. Plus the blue jacks. Sadly, no date printed on the board. I really wish that it had a date in there. Would make the guessing process less valid. Components are often good place to start the process. So let’s see what lies underneath that board! 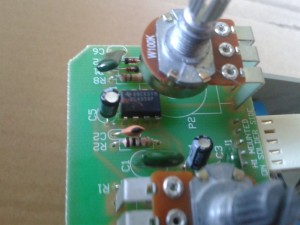 There is a dual opamp  in here!

Some documented units here at the internet have KA4558 chip instead of RC-branded one, so that should be a clue. Oldest Fairchild Semiconductor’s datasheet for KA4558 chip i could find is dated 2001, so i do believe that the units featuring Texas Instruments RC4558P are older than 2001. Drop a comment if you know the exact dates when these were made with KA and RC branded  chips. I’d be more than interested to know. The print on the chip is 66CRDYN, which tells me absolutely nothing. I’ve read that usual way for printing manufacture date on the chips is with four digits. Two for year in question and other two for the week of that year. Apparently not for TI chips.

The dual chip can be found only in these reissues. Original design is with UA/LM741 single opamp. Schematic for both versions (one with old single opamp and the one with dual opamp) can be found online, and checking them both out would be recommended. The dual opamp version just omits the other half of the chip completely by grounding the inverting input and shorting the output and non-inverting input. The other half is used as in original. So it is basically just wasting the other half, while staying true to the original.

The box itself is quite loyal copy of the original with the stamp on the back. But there’s also a aluminium sticker that tells us where this unit came from. 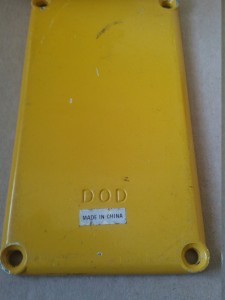 How does it sound?
Just amazing. For me, this one sounds way better than any of the single opamp versions i’ve tried. I actually cloned this version of the circuit for myself and i’m using this clone on my main pedal board. Once cloned, i can have standard 2,1mm DC jack and an indicator LED – Wouldn’t want to harm my original to incorporate those features. I use it to boost the rhythm riffs on choruses. Just a tad of boost and mild overdrive in addition to my mildly overdriven base sound. It just brings the songs alive. In my opinion, this is just the perfect overdrive/booster. Better than all the rest. I know some people will disagree. And they are welcome to disagree all they want. I just don’t see myself fastening any other design to my board as an overdrive anytime soon.