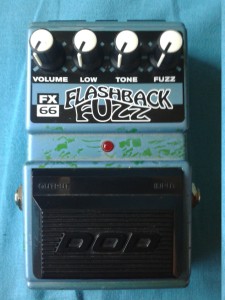 DOD has only produced two fuzz pedals in all of its existence. That’s not much. Plus both fuzzes in DOD back catalog are not fuzzes in traditional manner. Neither of the designs are transistor based, nor rely on own unique design. Both of them are rehashes of previously released circuits and they share PCBs with their predecessors. Where FX52 is basically a revoiced FX50B, the FX66 Flashback Fuzz is revoiced FX66 Grunge. A few interesting details can be read at America’s Pedal website. Lack of 6 components and some value swapping can apparently make a completely new effect. 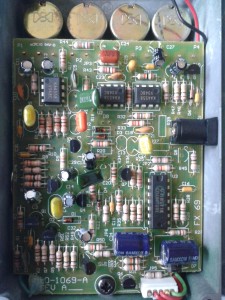 Note that the board has FX69 printed on it. Funny how tweaking the board really changes the characteristics. This doesn’t share anything else with the Grunge, except for the PCB, electronic switching and power filtering. Don’t know how the engineers at DOD pulled this off, but the result isn’t that bad.

In reality i was after the first production run US made unit, but this one was the only one i could find. And it suited my wallet too.

How does it sound?
Not bad at all actually. There is definitely some of that Fuzz Face analog feel in there, but it’s not really that close. It sounds more clinical than simple FF circuits, while still remaining quite musical. There is a lot of fuzz character in its sound, which is amazing as it still has nearly the same topology as FX69 Grunge. Quite usable, even though the uncontrollable overtones and glitching scratches are limited to minimum with all opamp and clipping diode design. I would personally recommend trying one out if you get a chance.