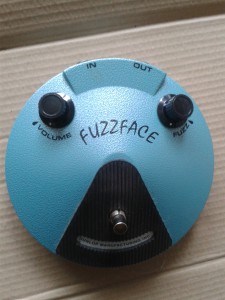 What is it?
Dunlop JH-1F Fuzz Face. BC108 Si transistors and branded as “Authentic Hendrix”. Manufactured around 09-11.

The Fuzz Face is one of those that everyone should play at some point. Because if they haven’t, they’re really missing out on a lot. Fuzz is not a distrtion as in Overdrive/Distortion. Not at all. Usually your standard fuzzes are created by pair of transistors driving the hell out of each other, or shunt-series-feedback amplifiers. The basic schematic is very simple (courtesy of GEO). It’s a nine component circuit, plus two pots. As for the origins of Fuzz Face, well. The Vox/Solasound Tonebender had been released earlier in the same year, 1966. So there’s a chance that the Fuzz Face may be the first known example in a very long history of a company ripping off other company’s design.. But let’s get back to this particular unit. 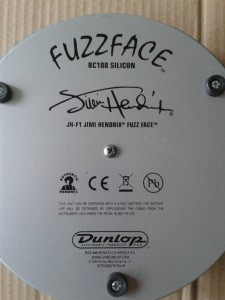 Backplate has “Athentic Hendrix” stamp right next to all the common modern day labels. Yes. It’s lead free. Reportedly, mr. Hendrix used original germainum version until he got fed up with unreliable behaviour that comes naturally with Ge-devices. So he later on used only the version with Si-transistors. In which point the microphone stand bottom inspired enclosure turned blue, i really can’t tell. Must be earlier than when Arbiter reissues were assimilated by Dunlop as i’ve seen couple of old Arbiter units in blue for sale (needless to say that you’ll buy a car for that amount of money..). Anyway, the transistors in JH’s unit were BC108Cs. A lot higher in hFE gains than original NTK275 versions. Nowadays commonly loved Fuzz Face transistors, the AC128 were introduced much later in a Dallas Arbiter reissues. 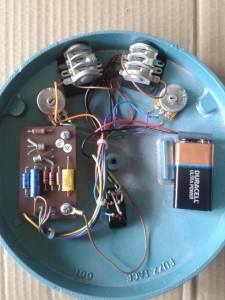 Insides look like they are true to the original unit. Board layout and resistors are as expected. There are no modern day luxuries here! No indicator LED, nor power jack. Just a crude place for a 9V battery. 26mm pots and big semi-closed jacks. At first glance, in all the simplicity it is quite beautiful. 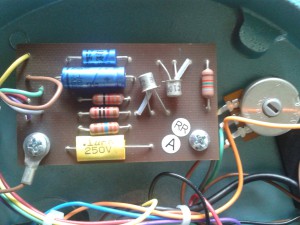 Board has everything laid out neatly. Four carbon composition transistors, two Philips electrolytic caps and one non-polar. which looks to me like it is 100nF and not 10 as in basic schematic. Looking deeper in to it, there are different versions of Fuzz Face. So hold the press. There should be trimmers, hidden caps and resistors.. And there are… 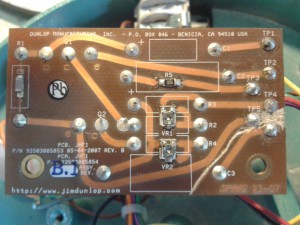 Unscrewing the board shows the Borg. The face is still there (and it is blue), but inside there’s the Locutus. SMD bias trimmers and tamer caps and so on. At first this unit sounded like it was slightly misbiased, but i thought that was a feature with BC108 transistors. In fact the trimmers were misbiased. No wonder the guy i got this from couldn’t get it thing to sound right. Tuned them by ear and got it running like it probably should. And just look at how the short on the right edge is fixed. You may now have a better idea why i sold off all my Dunlop made MXRs. I’m wondering if i should sell this off too as it gives me more reasons to dislike Jim Dunlop Manufacturing. Their plectrums are very good though… Sad thing you can’t score these for cheap. If you could, you should really think about getting a reproduction PCB and rebuilding the insides to match the 60’s specs with NKT275s. Maybe even repaint the enclosure to get your Picard back.

How does it sound?
Just as i expected. Harsher and colder than germanium versions i’ve played with. Actually. The guy i got this unit from told me that he bought it when he was after that “Fu Manchu” sound and got dissappointed. At that time i didn’t know that the unit was blue and it puzzled me a bit. Once i opened up the parcel, i wrote him back saying, “no wonder you couldn’t get it to sound right”. It sounds almost like a fuzz face, but in reality it is the day of the undead. Resistance is not futile. I’m thinking that i should probably stick with pedals with through hole components. You know, to stay organic. If you are looking for this exact sound, you should probably seek for modern chinese clone called “Blue Faze”. It is 1:1 and does not try to hide that it is the Borg. Plus it has all the modern day luxuries in miniature enclosure that sort of looks like three cubes in attack formation..