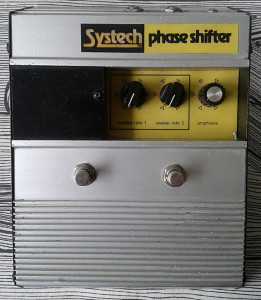 What is it?
Systech Phase Shifter. Made in USA in mid-70’s. Pot date codes considered, the unit has most likely been built in 1974.

I’ve got this unit more than a year ago and after initial testing it just sort of was forgotten to a spot on my museum shelf (for the units manufactured before 1980). As the testing didn’t raise much more but eyebrows, this didn’t get much more attention. But about a month or two ago a friend from nearly across the globe acquired one after decades of not having one (yeah, Pink! I’m talking about you!). His memory was that the unit was really good sounding and extremely deep phaser, almost pushing the limits of a phase shifter. 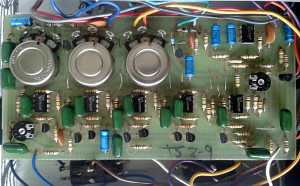 Sadly. He wasn’t correct about the pedal. Or he was. But not about this pedal per se. It did come as a surprise to me too. These phasers have apparently three different revisions of the Systech Phase Shifter. According to the dedicated forums, the first unit was in similar silver/yellow/black housing like this one, and the circuit design in those were pretty standard 4-stage phaser. According to same sources, this board revision is the middle one. Similar enclosure, but eight phasing stages. Not completely different to MXR Phase 100. The third one is the winner. This is the one with silver/red/black colored enclosure and optical design instead of JFET phase stages.

All three versions have a ramp feature for the LFO speed, which is very nice feature. There’s also an independent rate control for both foot switchable rate settings. Ramp works very well and has very nice gradual speed up and down.

How does it sound?
Sadly. Quite dull. This would stay behind just about any phaser if it wasn’t for the ramp. There is some notable personality to its overall phase, but still it is dull. Well working controls and there’s still some usability in there. Like most Systech pedals, this is a classic and highly collectible. Nice thing to have, but will this see much use? I doubt it.