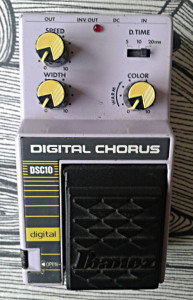 What is it?
Ibanez DSC10 Digital Chorus from 10/Power series. Made in japan, late 80’s.

Refined chorus in 10 series with more controls than usual. And it’s digital. So prepare yourself for some iron worm action. Well. Not exactly. At first glance, this seems like very desirable unit with lots of options. In the end it sort of lets you down. The controls are “Color” and “Delay time” switch in addition to standard width and speed. “Color” is a passive low pass filter control, which i think got included because the design team wanted it to sound and feel like analog devices. The idea in this control isn’t too far away from the Rat’s “filter” control. Otherwise, from functional point of view, there are two outputs that are out of phase with each other. So stereo use is more than recommended. Letdown comes from the fact that it just tries to be one of those omni-choruses, where everything from mild ear pleaser to noise monster is possible. It isn’t. 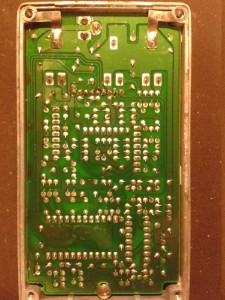 You’ll find the schematic from Dirk’s archive of the most beautiful traces known to man. Removing the bottom plate shown the well and tightly designed layout. Packed with noticeable accuracy (again, sorry for bad photos). Modern traces can’t turn me down this time. Just look at the joints and parts placement. There isn’t much symmetry, but the amount of stuff fit in there is respectable. Now we should talk a bit about the schematic… 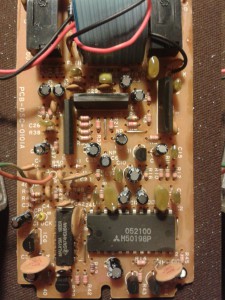 Motorola M50198 chip is the key here, basically just replacing the need for BBD pair in clock and delay purposes. That is one cool huge chip (i currently have no idea whatsoever how those work). The input buffering and phase inverting output drivers are your common parts. Rest of it. Not so much. In addition to the main delay circuit being a digital one, the LFO is created with JRC2904D. The 74HC04 Hex Inverter that we commonly find in electronic switching flip-flops has parts of it used as sort-of buffers between the LFO and the digital delay chip. Yeah. I know. I lost myself in there too. 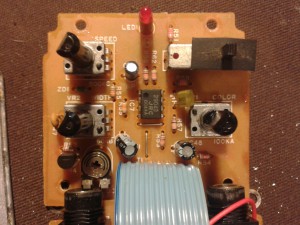 As shown on the last picture, the LFO is placed at the control board, between the pots and the switch. Due to my current knowledge, i simply cannot shed any more light on the subject. But it is beautiful pedal on the inside. More than just beautiful.

How does it sound?
Meh. Sad thing really. A rare Ibanez moment of stunning beauty and nearly unusable sound. The controls and the effort on the design let me believe much more until i played with it. On maximum time/width/delay time and minimum color setting, it does get somewhat close to a flanger style chorus. The sound behind the color control really bothers me. You can achieve the same “warmth” with dialing your guitar’s tone know down. Both methods can give you something that’s close to vibe-style effect but not quite.

It does have some potential and it’s not completely in vein. But it doesn’t make it even close of the top ten choruses i’ve played. If you’re planning on getting a Power series chorus, then i’d suggest to look for SC10 or BC10 instead of this one.