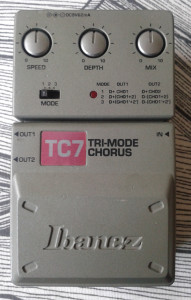 What is it?
Ibanez TC7 Tri-Mode Chorus from 7/Tonelok series, made in china. Stamp on the enclosure suggest the build date to be around 2005.

Now here’s the first! There’s not a hint of blue on this box! And in other news, the three modes are quite interesting – at least on paper. There are basically two separate delay circuits for two separate choruses that are simply out of phase with each other. And there’s only one LFO driving those delays. Tri-mode in this case means that the first gives out mono chorus and splilts the clean signal to second output. Second mode is for out-of-phase stereo output and the third widens the delay time range and has both outputs active. Quite usable options.

Ripping one open shows a highly populated board with crowded joints and modern traces. 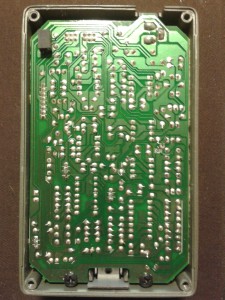 As with all 7-series boxes, the insides are made of five different boards. Well made solid build with pin terminals instead of board to board wiring to connect boards to each other. 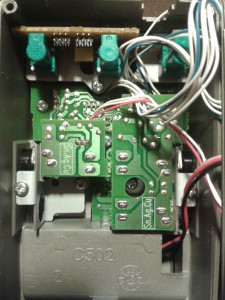 Work is neat in many ways, which validates the point that there are good manufacturers in china. I do not know which of the companies have built these, but they probably should be credited.

Down to the design itself. Couldn’t find a schematic right off the bat, but i assume that the TL022 is used as LFO and JRC4562s are taking care of buffering, mixing and driving for the different outputs and modes. So there’s one LFO driving the two Mitsubishi M65850 digital delay chips. 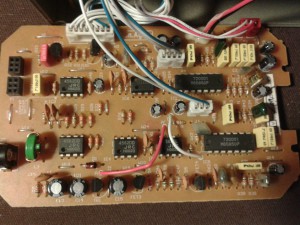 M65850 isn’t that widely used digital echo/delay processor as some others. But it has quite interesting datasheet with notion to Karaoke on it (check it out on AllDataSheet.com). So i suspect one should be able to find those chips from inside a number of different karaoke devices.

How does it sound?
Solid and trustworthy. Nothing too special in the sound, but at the same time it does have some personal character to it. The longer delay times found on third mode have similarities to a flanger design, offerign quite wild and swirly choruses. Not completely unlike vibe effects out there. Not bad at all. The fact that the delay line isn’t your standard BBD or digital chip may be the root of the personality found here. Well designed.

If i needed to drop all other choruses from my collection and leave only three, this one would probably make it to the ones i’d keep.