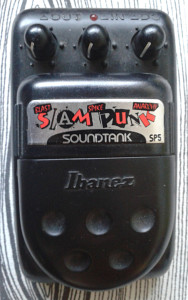 What is it?
Ibanez SP5 Slam Punk distortion from later Soundtank series. Made in taiwan, mid to late 90’s.

One of the soundtanks that i had a pleasure of being in contact with before acquiring one. I did a rehousing job with true bypass for a friend and played with the circuit before letting it go. I knew then already that i may need to clone this circuit for myself, and maybe mod it slightly to lose some of the low cut that the original pedal had. Not much, but still the original had slightly clinical bottom end. After building couple of clones, to no surprise, i found another healthy original for reasonable price. This puppy is that one and i’m not letting it go. 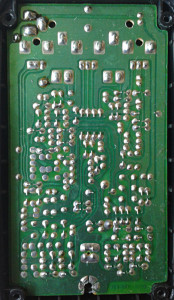 The board has standard taiwan modern traces. Take a note of the empty, unmarked holes. The board has SP5 printed on it, so the exactly same board hasn’t been used for another desing in this series. But i do believe the layout without the silk screening has been.

However. The schematic is up at 8bitsindgenug. It shows some similarities to ProCo Rat and other Ibanez designs based on it. The board has a lot of room on it. 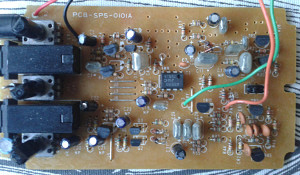 Even though the Soundtanks aren’t getting the appreciation they should in general, this one is one of the most underrated pedals in the series with Black Noise and a few others. Nevermind the plastic housing. The sound is there, regardless of the box.

How does it sound?
High gain accuracy and definition, but still usable as a very nice overdrive. Think of Social Distortion’s “When the angels sing”. This pedal pretty much nails that overdriven/distorted base sound. No doubt this pedal wasn’t used on the recording, but the sound is close. Anyone mocking this one as a plastic cheap crap should play with one and say that again.