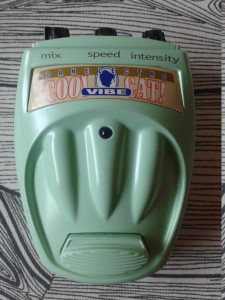 What is it?
Danelectro CV-1 Vibe from Cool Cat Series. Original version, no level trimmer under the battery slot.

I did get pretty far with my collection without having a single vibe-only pedal in it. This unit finally changed that fact. Danelectro made a number of itself with the vibe from its mini series. And for a good reason. It was very cheap and very good sounding vibe that many people simply true bypassed and rehoused. The success of mini-series univibe clone set pretty high hopes for this unit too.

This is also an good unit, but it has couple of reported faults. The first issue is with the delay of wet signal. I do get the idea of disconnecting power from the circuit when bypassed. But it is a very stupid idea on a circuit which operates on four LDR (light dependant resistor) stages that all need notable amount of current. Yes, that’ll save you from swapping the battery every 4 hours, but then again – who uses batteries anyway? Now, when we cut the power and push it back on when bypass switch activates the circuit, there’s bound to be a short, less than half a second delay before all four LDR stages are running properly. That is a fault. Not that it would bother me in any way, but that still is a fault. 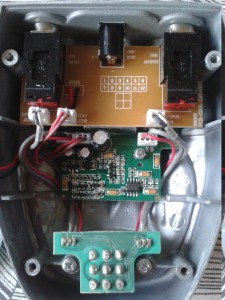 Second issue reported is the rise in output level when activated. Later units have a trimmer pot under the battery slot, which lets you adjust the level to perfect. The original units don’t. The issue comes from the dual opamp seen on the gut photo’s main PCB on lower right corner. That simply applies slightly too much gain for the output signal. This is another issue that doesn’t bother me at all. But someone who would use this vibe as a everyday effect on his/her board, would suffer from these faults. Two “errors” on one design has never been a good thing for the pedals (nor for manufacturer’s) reputation.

Both issues can be addressed with relatively small effort. Just take the power continuously to the circuit, bypassing the switch. And change the value of one resistor to get the unity level back. Both are simple procedures, but i personally don’t see a reason to perform either. One can and should probably use this for recording instead of live performing. The issues mentioned do not bother you in studio and there’s a very good reason to use this for recording…

How does it sound?
And this is that reason. The overall sound is very close to the classic Uni-Vibe, but here we have added personality and overall feel of the sound is slight darker. Three controls can tune it from mild phaser-like atmospheric slow sweeper to super-wobbly wild child. Both extremes take the whole signal and put it through the blender with your morning smoothie.

For the price and construction (disregarding the two faults), this is in fact a very good catch. One should still look for revision two, rather than the original. For me, i’m keeping this as is.