Welcoming the new year 2014. And I’m starting this year with a real oddity. 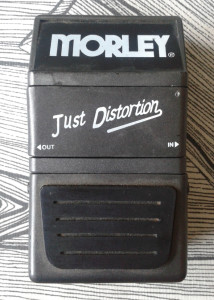 What is it?
Morley JBD Just Distortion. Real oddity. Made in china in the 90’s.

Ok. So the Morley engineer thought that it is a perfectly sound idea to create a pedal with no controls at all. The trust and belief for the design had to be strong. This must be one of the only distortion designs with no controls at all. There are some fuzzes around with only level control, but this unit here takes the grand prize. Here’s a quote from the “manual” (which is one tiny piece of cardboard):
The Just Distortion is exactly what the name implies; Just Distortion. No bells, no whistles,
just great distortion at a great price. What, no knobs?! We designed the pedal with a preset distortion setting. Great for all types of music and playing styles. 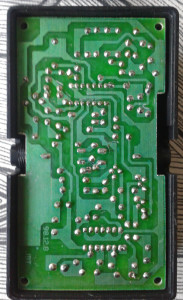 Box is all plastic and i think this one is far from unbreakable. Would not dare to stomp on this with my heavily overweight slob of a body. The traces are a lot wider than what you’d expect though. So the circuit inside isn’t that bad. The design itself is something you would expect from Morley. A quad TL074 opamp with 1N4148 diodes for clippers. Although named correctly, the schematic found online can’t be for this unit as there are no trimmers for gain/tone/volume on the board – like drawn on that schematic.. That’s why i’m not including the link as usual. 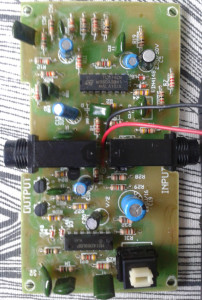 We’ve seen missing controls like the “gain” from Digitech DDM Death Metal, but that was simply right thing to do to take off from the design. Here.. I’m not completely convinced if no controls was the right decision. On the other hand, the enclosure is among the worst plastic ones ever made. I’ve seen some other pedals in this same style of box, but just can’t remember what the brands were. So i’m guessing that this was a commercial test to see if it will sell. No wonder it didn’t. Other than the well made board, i really have nothing positive to say. Bad design, ugly and brittle plastic box and the sound…

How does it sound?
Apparently the mid honk is the coolest thing in the world. Sounds like a bastard child of  Boss DS-1 and Ibanez TS9 with no controls. Soundwise, the pedal does not convince me much. Honking mid-gained unit. It has some personality to it and part of that comes from you not being able to tweak it. Think of Rocktek DIR-01 with all the controls maxed. That box should not have any controls even though it does. This one? Could it sound any better with controls? Not sure. Only good thing i can think of is the fact that these are pretty rare and becoming more rare everyday.