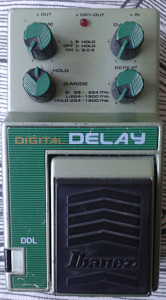 What is it?
Ibanez DDL Digital Delay from Master series, made in japan in mid 80’s.

One of these units that usually are way too pricey for me. But if someone is really selling his/hers and is willing to give it away for good price, i’m once again there to snatch it. I even got a very nice present in the same parcel with this, but more about that later. Anyway. Thanks to Ari!.

I believe this unit was Ibanez/Maxon’s attempt to kill Boss DD2/DD3. The functionality matches, and the competition for king of digital delays was heating up in 1985. DDL has two different delay time ranges on a switch, plus “hold” mode. Which is similar to one found in Boss DD3 (which was in fact a rebranded DD2, but that is a subject for another pedal post).

The board is full. And when i say full, i really mean it. Neat and tiny solder joints right next to each other. And plenty of them. The MC4101F is mounted on the bottom and is responsible for all the action.

Couldn’t help myself but take another shot of the chip itself. That’ll also let you cloesr to the real scale that those solder spots have. If i was amazed what the Maxon engineers did with DFL, the digital flanger from this same series, i’m even more impressed now. 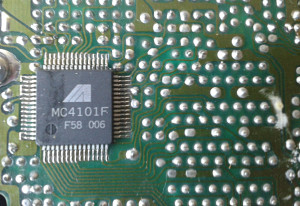 The board shares some qualities with the DFL. The three trimmers are in the same spot as is the DA/AD converter chip, the MC4101F. Couldn’t find a schematic for this right of the bat, so i can’t be 100 percent sure. It does seem like the two share some parts of the design. 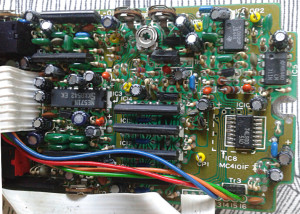 The controls on this design are very impressive. There’s user’s manual scans available at Ibanez pedal information heaven, the Tone Home. Quite interesting read. They have listed the maximum delay time wrong though. It is in fact 1800ms and not 900ms.

How does it sound?
True delay monster with massive, yet clean delay times. Where the Boss’ counterpart is unnatural and cold, this massive design happens to capture some of the beauty found from analog delays. Not as clinical as you’d expect from a 80’s digital delay. Some circuits may have been scorched by time, but this sound stays unaffected. It still sounds good and fresh, even if it has about 30 years of life behind it. Very usable with its two delay time ranges and the hold mode. No wonder you won’t find any of these for cheap.