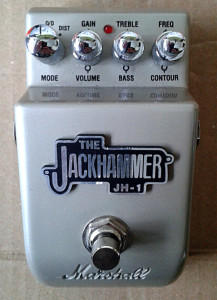 What is it?
Marshall JH-1 Jackhammer Overdrive/Distortion. Made in china in mid 00’s.

We’ve seen a few of these units that combine two popular dirt effects – the overdrive and the distortion. So far i haven’t come across an unit that would excel in both. First analogue would be Boss OS-2, which is terrific distortion, but super sucky overdrive. But. More about the sounds later. Let’s rip this puppy open and see what’s inside. 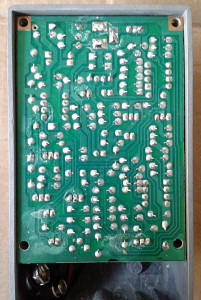 As with all the small metal series boxes, the traces are clinical with autorouted feel to them. The soldering work is very chinese from 2005. Not bad, but i’ve seen a lot better. Lots of praise comes from using through hole components. Overall feel is a lot sturdier and these units really feel like they are built to last. The off board wiring is done with terminal sockets. Looking at the component side of the board, the opamps providing the boost and gain are Marshall’s weapon of choice number one, the Texas Instruments TL072. It is a very nice sounding opamp for most occasions, like the big black Bluesbreaker. Here, the designiing engineers have wanted to take a bit too much gain out of them – resulting in opamp clipping with not-so-great decay on the release. Sort of reminds me of main stage distortion of the transistor based amplifiers. Yup. It is that good sounding. It is, of course, masked by the clipping diodes when gain pot is set at over half of its sweep. There is a factory schematic floating around the webs… 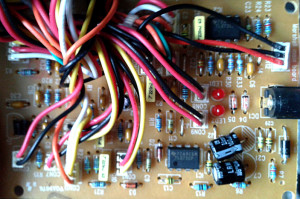 There is two pairs of clipping diodes. The first pair are 3mm red LEDs and the second pair are your standard 1N4148s. The design doesn’t seem to offer a lot of surprises. After a quick look, it seem like the OD/Dist rotary switch is basically cotrolling the clippers.

I guess the board could be tweaked to sound, well. Generally better, but this unit will never become a DIY favourite. Why? Let me tell you why. There are six pots and a switch in addition to semi-complex circuit and one of those pots is a reverse logarithmic dual gang. So anyone trying to fit a clone of this one in 1590B sized enclosure is either insane or very adventurous. The pots control gain, volume, treble, bass, frequency and contour.

How does it sound?
If we start with the distortion side, there’s not much good to say. It’s muddy and unarticulate no matter what the settings are. That is just simply bad. But. Once we turn the rotary switch to Overdrive side. That’s when to tone opens up and controls start to feel correct. Open, bright and with enough controls to match any guitar and amp combination. The overdrive is very versatile and actually very good effect. Where as Boss OS-2 sucks on overdrive mode, but shines bright on distortion, this one is exactly the opposite. The distortion is the kinda sound that i don’t think i’ll find any use in anything. But the overdrive. That’s well worth spending the $30 on this Marshall unit. Well worth it.

1 thought on “Marshall JH-1 The Jackhammer”