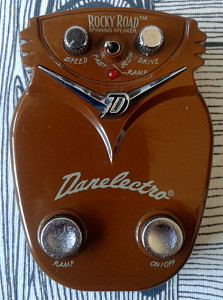 What is it?
Danelectro DJ-20 Rocky Road Spinning Speaker from Danelectro Mini series. Made in china around mid 00’s.

Leslie simulators are one sub-genre of effects that i haven’t had a lot of interest on. Is it a tremolo? A vibe? A Chorus? No. It’s a Leslie simulator. Which translates to it being a tremolo, vibe and delayless chorus. In essence, it is a amplitude modulation effect, designed to give you a feel of a spinning speaker-like illusion. Sort of like a stereo tremolo/vibe that goes ping-pong. In fact, a Leslie simulator is nothing more than a marketing scheme. Rarer the idea for the pedal, the better chance to sell them. 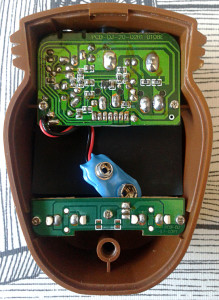 On the technical side, the effect is created with a HE83015 8-bit micro-controller. There is a schematic for the complete circuit on the builder forums (you’ll need to log in to FSB to see it, so no link at the moment). Basically we have a overdrive/distortion that’s given to the programmed digital controller for amplitude modulation in stereo (or that’s how i read it). And once again, my shortcomings in the area of digital micro-controllers prevent me from digging any deeper. For now. So it is a lot more complicated than what you would expect from a stereo tremolo.

Design has peculiarities like only Dano can deliver. The Ramp up/down feature  only works in fast setting. And the distortion, or the Drive as it’s called…

How does it sound?
Um. I don’t know what to say. The drive part sounds pretty awful with its broken sounding clipping. As a huge disadvantage, we also have a volume boost when effect is activated. Only good feature is the ramp. This offers fun and wild modulation speed changes that are gradual, not instant.

This unit has gained some status, but why.. Beats me. Nice novelty toy, but not by far a good, usable effect. If a real Leslie sounded like this, i have a hard time believing anyone would have ever used one for anything. To sum it up – this definitely has something inside that we don”t see every day in pedals. But that doesn’t make it any more good than what it actually is. A novelty toy.