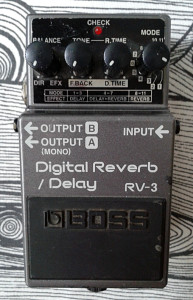 What is it?
Boss RV-3 Digital Reverb/Delay from compact series, made  in taiwan. Serial number on grey label points to june 1991. But since the units were apparently manufactured from 1994 to 2002 and the label was changed from pink to grey in early 1999, i think it’s safe to assume this follows similar error on serials as early taiwanese HH-2 Heavy Metals – being a decade off. This would mean that this unit is really manufactured in june 2001. Which makes a lot more sense.

RV-3 is a second generation of Boss digital reverb pedals. Sharing the color with the ground breaking RV-2, but housed in standard compact pedal sizes enclosure. As it’s predecessor, the full blown SMD design was expected. Where the RV-2 had two boards stacked the RV-3 has only one. It is as tightly packed on both sides though. The circuit footprint is way smaller and the features are doubled. Who doesn’t like to live in the future. 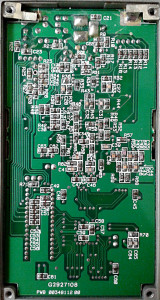 There’s a schematic up at FIS, if you’re interested. It shows pretty standard buffering and mixing with simple splitting for the stereo outputs. The digital part creating the reverb behind the mixing is pretty complex. Apparently the same digital setup can be programmed to do other things in addition to reverberation. The schem has “PS-3” printed on it, so my guess is that they have been using the same board for these two different effects. Maybe even more pedals share the same DSP architechture. 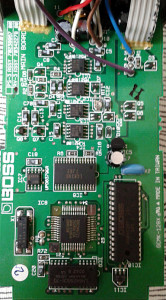 Board design is very modern looking. There are 11 reverb and delay modes with reasonable controls over the main parameters. Mix control for all modes. Time and feedback controls for the delays and reverb time with tone to control the high end damping of the reverbs.

How does it sound?
Very good with lots and lots of usable modes and the stereo output also adds to the usability. The digital signature that usually takes the edge off from so many designs is practically nonexistent. It’s not harsh sounding but a lot closer to natural. There’s even a feel of the expensive rack mount effects present. Wouldn’t call it “warm” or analog-like, but still pretty good. Most negativity comes from standard Boss facelessness. Not too personal and not the greatest pedal ever made – but still. Very very good. And this will see use as it’ll suit many situations of use, easily.