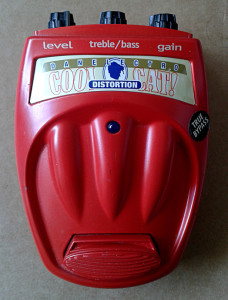 What is it?
Danelectro CD-1 Distortion from Cool Cat series. Made in china around 2009.

The number of good sounding units in this series seems to be on the rise. Took me a while to get one and to tell the truth, this didn’t come too cheap either. But i wanted one, so i went out and got one. Simple as that. One part of the attraction was that all there was on the internet was just a couple of guesses about what the circuit could be. Usual guesses pointed out this being a derivative of the “standard” Danelectro distortion, the Fab Tone from original series. Granted, that design may have been circulating in the brand’s catalog more than enough. But. Since there were nothing more than guesses based on nothing around, i felt it like a duty to shed a little light on this subject. I’ll say one thing before going any further. The box feels and sounds nothing like the Fab Tone. 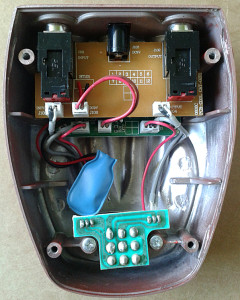 Opening the box up, no surprises at this point. Just a standard Cool Cat series jack and switch board inside. But as we all know, the effect itself is on that other board. Four transistors and a dual opamp. At first glance, the first transistor looks like it’s a buffer, and there’s two separate pairs of clipping diodes. Nope. No clue about what’s it based on, at least not just by taking a quick look at it. 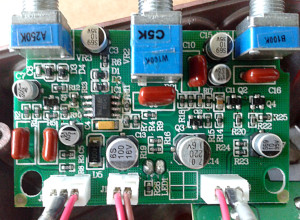 But several hours, a multimeter, a few liters of coffee and several packs of smokes. Yup. Now we know. At first the design didn’t ring any bells, even though it should have. So, we have an input buffer, followed by a non-inverting clipping amplifier with diodes in feedback loop. Then we have hard clipping stage, followed by dual gyrator-based tone section and a buffer for output. 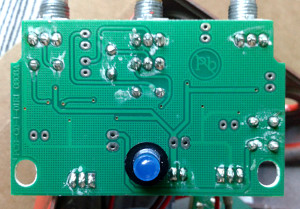 Design is, in other words, pretty impressive distortion design. At the moment of my trace it really should have been obvious to me. Anyone ever heard of a distortion unit called Distortion Master? Here we have that, almost verbatim, with slight modifications on the tone controls and the gyrators they control. May that mean whatever, but still, we have $200 sound in $40 package.

How does it sound?
Very good. Not too far from those distortions that try to capture the feel of old Marshall amps pushed to the max. Not too high in gain, but well balanced and sufficient. Gain control goes from overdrive tones to big distortion sounds. EQ section works well and sounds like you really don’t have any need for a separate mids control. I would go so far to call this one of the greatest rock distortions. In one word, usable. But we should remember it is heavily based on an existing pedal that is currently manufactured. Still. Wonderful sound to have in one’s toolbox of sounds.