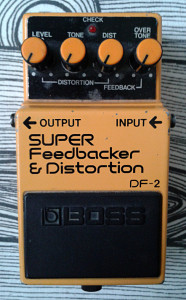 What is it?
Boss DF-2 Super Feedbacker & Distortion. Made in japan, november 1985.

At first, the DF-2 has a history that is worth mentioning. The unit was originally called  Super Distrotion & Feedbacker, but since DiMarzio owns the name”Super Distortion”, Roland was forced to change the name. Similar thing happened with DOD’s “Supra Distortion”, which was originally also called Super. Anyway. Due to this legal battle, there are two cosmetical versions of DF-2 in the wild. The original with infringing name, was only manufactured for a short period of time (approx. four months) and that version has become remarkable collector’s edition. As usual for Bosses, the manufacturing moved to taiwan in 1989. The circuit had a revision in 1991 when the ACA power supply requirement was dropped. Design was discontinued in early 1994 and later replaced By FB-2 Feedbacker/Booster. There is a schematic for DF-2 floating around the webs, so you should be able to find it if you need it.

Got mine in a trade with usual “faulty” label. The faulty part was just a feature with the (idiotic) ACA power supply not playing nice with the modern standards. 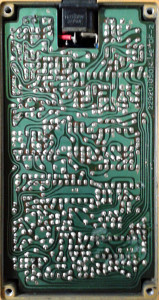 The older japanese board designs are always impressive. Even more so for the complex board designs, such as this one. Just look at the number of solder joints and the acid trip traces in there. Definitely not the simplest circuit we’ve seen. As the fetures go, we have our distortion that reminds us slightly of DS-1, with basic gain/tone/level control. Then we have our Overtone knob. This knob controls the amount of distortion for the feedback one can activate on choice by holding the bypass switch. More distortion for the feedback gives out more harmonic overtones for the rising squeels. 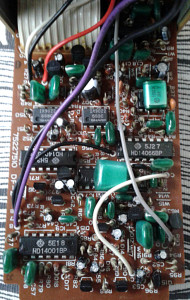 So in essence the unit is a distortion with active electronic feedback that can be activated when needed. It is an idea that was something new and innovative back in mid 80’s. The method how this effect was achieved isnt’ too simple, but it did change something in the mindet of effect designers. Designers weren’t bound by just copying the ten to twenty classic circuits and improve on them anymore. In other words, and in my opinion, these kind of breakthroughs paved the way for all digital effects. Progress isn’t always good or bad. But it is always progress.

How does it sound?
The distortion tone has a similar feel as the DS-1 Distortion, but whilethere may be similarities, the DF-2 has more balls. Maybe it’s just a bit more low end and possibly a bit more gain, but that is enough to sound better, meaner and fatter. When one holds the lid, the rise of the feedback acts very much like standing in front of a Marshall full stack would. So the feedback sounds and feels more organic than one would expect.
This unit sounds like a milestone. Mainly, because it is.