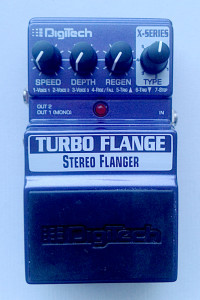 What is it?
Digitech XTF Turbo Flanger from X-series. Made in china around late 00’s.

Saw this going for a decent price and just couldn’t let it go. Played around with it for a while and i was ready to call it before opening the bottom. Not an exception to the rule, but simply yet another Digitech board shared with the rest of the series. Opening it confirmed my suspicion. As with almost all X-series pedals, this too has the same board with same chip as the others. The PCI-style interface pins on the lower right corner is a dead giveaway. 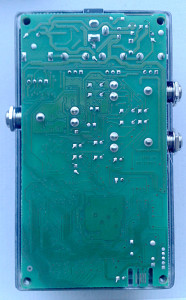 So the design is nothing to write about since i’ll be just repeating myself over and over again. The code, box color and the labels are the only thing separating this from all the other boxes from X-series with a switch as a right hand side knob. So instead of going through the general idea of digital effects again, let’s just focus on the features instead. 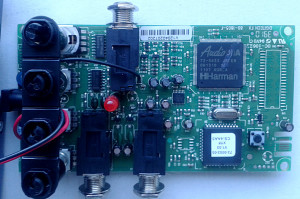 For controls, the Speed, Depth and Regen (a.k.a. feedback) are quite the standard. For analog designs, the additional controls usually affect the delay time and therefore alter the overall tone. After all, all the flangers are effects that have a LFO (low frequency oscillator) controlling the delay line time in sync with the LFO. Turbo Flange here doesn’t say anything about the delay times, but it has seven modes to go with. Voices 1-3 are pretty standard flangers, and same could be stated about the rise/fall and trigger up/down modes. For most interesting part, the 7th mode is 7-step which randomly (at least it seems random) selects the next step frequency in the LFO pulse. This would have blown my socks off if i hadn’t seen similar feature before. That’ll be Boss PH-3.

How does it sound?
If this wasn’t so sterile in its tone, i’d rank this very high. I could see myself using this for parallel guitar loops when recording. Maybe even for a bass with similar application. The seven modes offer quite a nice set of different digital flanger modes. My gut feeling is that this sounds very decent for an all digital unit. However, it’s not even close to the greatness of Ibanez DFL, which has nice digital design that springs from the analog world. This one here is simply a digital software effect in a stompbox form, with relatively low power consumption. Good, but maybe still not good enough. The 7-step mode is great thing to have on a flanger and it’s not every unit that you’ll come across to have this feature. Probably most of the VST-plugins will carry this feature, but you most likely will not carry VST-plugins in your pedal board. I like it, but not enough to call it great or a favourite.