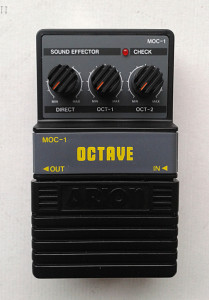 What is it?
Arion MOC-1 Octave. Made in Sri Lanka around early to mid 00’s.

This unit was my very first brush with Sri Lankan reissues. Bought it as new for the nice price tag and more importantly, out of curiosity. Arion is rather personal brand. Its pedals have certain cult reputation which isn’t based on its plastic appearance, but the tones. Sure these come cheap, but that doesn’t attribute to bad craftmanship nor bad tones. Negative things come from plastic housing with a plastic battery lid that are just as prone to get lost as the ones on old DOD FX-series boxes. Other downside is the knobs. The pots are not bad at all for small 9mm board mount pots. The push on knobs get loose way too easily. So one strike for the plastic enclosure, second for the battery lid and the third for the knobs. Already at this point one could argue that i shouldn’t praise effects with such obvious flaws. But. The plastic enclosure can handle stomping, the knobs do not  part ways with the rest of the pedal by themselves and that is true for the battery lid too. so none of those offer enough leverage to call Arion units simply bad. Then comes the areas which are way more important. Take a look at the photo below. Neat work, and the boards are exactly as they were in the original, early 80’s japanese Arions. 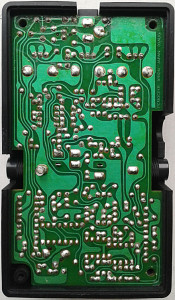 Traces and solder joints are just plain work of beauty. Acidy and hand drawn feel. How can you not love this? The board design adds more to the so called “mojo” factor than many other things. I try to restrain myself from using the m-word too much as it’s been used without any warrant so much over the years. Either way, the trace side is just beautiful. Component side isn’t that sleek, but still decent. Seeing the actual board pretty much take all the firepower out of the three culprit arguments. What does the plastic housing matter, if the electronic and board designs show this level of excellence? Not sure, but these could be made on to original japanese boards. Just assembled in Sri  Lanka. 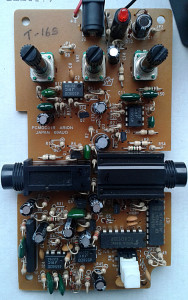 And then there’s the electronic design. Some forums claim the circuit is straight up clone of the classic Boss OC-2. Haven’t traced this and i have yet to see an original schematic to confirm. Just by the looks of the board, i’d say no. It’s not your straight up clone. It has similar features, but still no. At least the semiconductors and number of them do not match. While the features of 1 octave down, 2 octaves down and the clean mix level are similar,  that doesn’t mean that the circuit has to be identical. Even if the most important thing would suggest that too.

How does it sound?
Clean, but powerful. One of the best analog down octaves in terms of tracking and keeping the octaves in place. MOC-1 is actual true competition for OC-2, EHX Octave Multiplexer and others alike. Very nice sounding unit that keeps the output levels in usable range. Other than being plastic (and the other slight culprits mentioned above), there isn’t much negative to say about the tone. Very decent unit to have and use. Takes easily a spot in the top five of all analog down octave dividers.