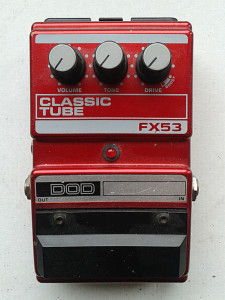 A unit that’s been mostly put down by the misconception about its design for decades. I know i was under the wrong impression for a long time too. The name may point to the direction of all the different tubescreamers and derivatives, but no. There is practically nothing from TS-family in here. If you don’t believe me, check the hand drawn, traced schematic up at FIS. I do get the idea for the name. The designer may have been after that certain accent on the mids, but that’s not the main thing for this design at all. Look at the first gain stage after the input buffer and the switching. It’s a cross breed with TS-style feedback loop clipping diodes and a 250 OD-style gain control. The diodes in the feedback loop is the only thing bearing any resemblance. This driver stage is then followed by a hard clipping stage before the volume and the tone controls. 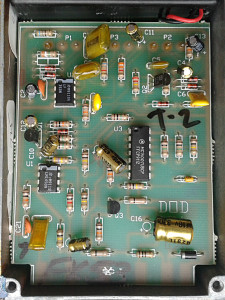 Not even the tone control topology show any resemblance to TS circuits. So the design here is not like many the others. I wonder what would have happened if DOD had decided to paint these green. Since majority of players at the prime of this unit’s selling days were about to slam it as a TS-derivative anyway, the green colour would have been a nice touch. Then some folks would have possibly noticed that the TS and Classic Tube do not sound alike.

The build quality is common with all the others from this era of FX-series units and the electronic switching follows others too. And if we try to find a continuity in the design presented in the schematic, this might very well be the link between FX50-B Overdrive and FX55 Super/Supra Distortion. After all, it is brighter in red (could it be called more yellowish?) than the Super/Supra – so in a sense, also a missing colour between the FX50 and FX55. You could also check out the notes on Americas Pedal on the FX53. I believe the author in there is right about the unit trying to be a competitor to TS9, not to copy it in any way.

Even if there were similarities in the tone to the “suspected sisters”, the design does not support that claim. And again, no. Neither does the sound.

How does it sound?
There is a certain emphasis on the mid frequencies that may have led some people to think TS. To me, however, words like amp-like and smooth come to mind. Neither of these are words that i would use to describe a TS or its derivatives. The amount of gain available is quite different too.

Now i’m starting to piss myself off. Why on earth do i keep comparing this to TS, when it has clearly very little to do with that design? Because most of the world still do call FX53 a “DOD’s take on a Tubescreamer”. The design, nor the sound, have very, very little to do with it. How can i be more clear about this? Please. Stop referring to TS when you talk about this effect. I know i’m going to stop doing it. Right. Now.