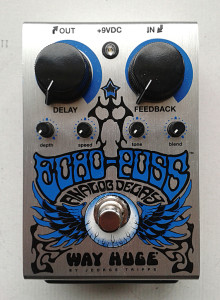 A guy offered this in a trade. And being the type of analog delay friend that i am, i had very little choice but to go for it. This is my first Way Huge box. While it isn’t the Way Huge that originally made the name, but a modern Dunlop factory pedal, i was somewhat enthusiastic. This continued all the way to the first test run. I’ll get back to that in a bit. As usual, i opened the unit up to see what was inside. 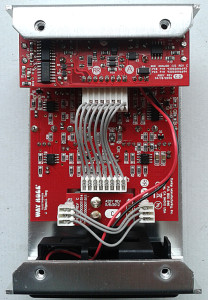 Standard two-sided Dunlop manufacturing read boards with ground fills, all the stuff board mounted and three boards connected with clip on terminals. At this point i didn’t have interest in taking it completely apart. Neat and modern, but dull, if you will.

About the design itself, we have an analog delay with modulation circuit with it. In addition to normal delay time, feedback and mix (called blend) controls, we have tone acting as a filter and two controls for modulation – depth and speed. The delay time is promised at 600ms. Quite impressive set of features for the price, right?

How does it sound?
But then comes the sound part of the unit. Sure, there ain’t that many crystal clean analog delays around. The ones that are are usually priced at higher range of the number on the price tag. And the reason is rather simple. The 600ms is your maximum delay time as advertised. But. I’d say the usable part ends with 280ms as anything over this time will result in BBD chip distortion. This distortion is rarely wanted and its texture isn’t very pleasing. The tone control can be used to hide parts of this distortion and by cutting highs i was able to go near 400ms without the distortion bothering that much. It will be present with the delay time knob over half way. This is the biggest culprit. The modulation works well and sounds very good on the repeats.

I’d say the price/sound/feature ratio is well balanced. After all, the analog delays that are actually good do not often come in this price range. Not bad. But nothing mind blowing or too good either.