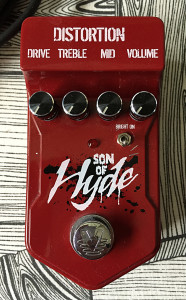 What is it?
Visual Sound (currently Truetone) V2 Son of Hyde Distortion. Made in china around mid 00’s.

For several reasons, i’ve had mixed feeling about the Visual Sound products for a long time. I’ve repaired a number of the “V1” series pedals and sadly, i’d call the manufacturing methods sub-par. (Not to mention the numerous issues i’ve come across with the company’s highly acclaimed power supplies…) Extremely thin and brittle traces are the biggest issue for me. Other, quite surprising thing with this one was with the pots. As you can see, the top end of the pedal rises above the pots, sort of like a protection ridge. But since the rise is only on the top end, the sides are not protected at all. And with this we get to a reason why i have a Visual Sound pedal in my possession at all. Bought this one used due to extremely low price tag and a mention that the pots are broken. The seller suspected a beer/juice/whatever to be the cause, but in fact, the gain and volume pots had been broken due to hard handling. Like i mentioned, the sides are not protected and thus, the gain and volume are your best bet to see broken things on any VS/Truetone V2 pedal. So the actual chinese manufacturing and certain aspects of the housing design are slightly at fault. But this doesn’t mean that the rest of the pedal was. 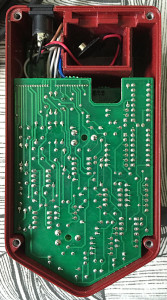 Workmanship is ok with professional looking joints and so on. The traces are not that ok with them being more thin and narrow than what i’ve come accustomed to. The board design consists of main board, control board and a small switch board. The jacks are handwired. 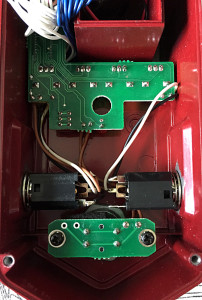 The main board is quite full with five dual opamps and two CMOS switches. The trimmers are for the bass control and the noise gate level. There is a switch for the noise gate below the noise gate control. The latter versions, presumably after 2008 have just jumper wires instead of the gate trimmer. Apparently the control didn’t perform that well. According to user manual (found on Truetone page), the pot was always set on minimum setting, so it was removed from later versions.

Another interesting thing is that the pedal is claimed to be a single version of Jekyll & Hyde OD/Dist pedal’s distortion side. I won’t agree. The Hyde on the original V1 double is a rewritten Marshall style distortion with way less component footprint. And more importantly, the tone, to me at least, is nothing alike. The thing could be as stated with V2, but i have no experience with that unit. Yet.

The reason why i’m not slamming the whole product for its obvious faults? Well. The circuit designer is one of my personal idols. And…

How does it sound?
This thing sounds fricking awesome. While it doesn’t sound anywhere near the Hyde side of the J&H V1, it is a serious competitor to most highly regarded metal distortions out there. Fat, mean and creamy. Seriously, this takes on my current favourite, HM-3 head to head with good results. Gain setting is quite useful, which isn’t the case with most metal boxes. Meaning that the tone goes from driven Marshall stack to that swedish Death Metal sound everyone knows. The bright switch can add a whole lot of highs when needed and the treble/mids controls work sort of like a age knobs. You know. The younger you are, the less mids you are likely to have in your tone. Probably the best metal style distortion in a long time. And it signs rather beautifully with leads that are not metal too.

On the downside, the bass control could have been on the outside for better control. And if the board and traces were more reliable and the housing design was more to my liking, i’d flag these things around like no tomorrow. Sounds great, but there are a few aspects that leave room for hopes. The tone does make me think if i should just buy one of the Truetone V3 series pedals. Just out of interest…