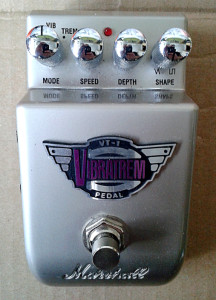 The Marshall pedals are curious things. The hits in the 60’s and 70’s , another hits in early 90’s. After that the big black box series went through massive inflation. The next generation of Marshall pedals were introduced in early 00’s, while the players rediscovered the original Guv’nor and the original Bluesbreaker. While all the earlier Marshall pedals were just fuzzes, overdrives and distortions with one wah in the lineup, the “next generation” offered wider range of sounds. The nine effects in the next generation series have a few distortions, but also a reverb, delay and a few different modulation effects. This is one of them. 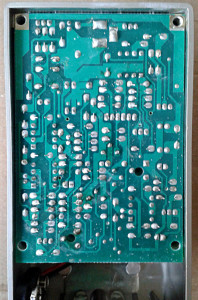 Board looks like most modern designs. Dull and not too eye pleasing. But the overall construction with all the wires does look pleasing. Even though the wires all have terminal sockets to minimize the labour. Also, the through hole components does give us a hope that not all big name designs are done with baking the surface mount components in chinese toaster ovens with litres of flux residue all over them. 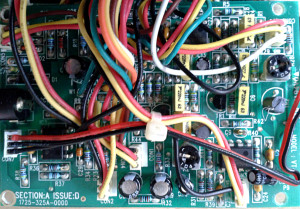 It is quite complicated design that i’m not going to unravel more at this point. This would be a pain to reverse, not to mention how massive undertaking it would be to clone it. Quick searching did not reveal a a schematic, but it did point me to a reported fault.

Apparently  some units tend to come over unity level with sort of boosting the output level. At those brief test runs i had with my unit, i didn’t notice it. Guess i’ll need to revisit the testing. ..Or it could be one of those psycho-aural or psycho acoustic phenomenons often affiliated with tremolos and their output levels.

How does it sound?
When it comes to tremolos and vibes, i appreciate the fat and thick sounds. This heavy hitter provides those both with two distinctive wave forms. The sound is somewhat overwhelming, but still it keeps your guitar’s tone well in tact. Tremolo part is thick and juicy. Vibe is a lot brighter than most of the vibrato effects i’ve played with. That’s not a bad thing.

I’d say this makes a very usable effect in both modes. Personally i find the tremolo part to be more to my liking than the vibe, but it does sound good all the way. Recommended tool.