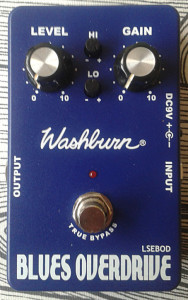 What is it?
Washburn LSEBOD Blues Overdrive. Made in china around 2010. Should it ever even been made? Not so sure.

So. It is 1:1 with Artec Blues Overdrive. Artec is a korean brand that’s been around for some time. It has produced couple of interesting, or at least promising designs. I’ve had some contact with a couple those korean units and those are not too bad design wise. There are couple of Artec boxes that i might be interested in, even at the moment.

Before getting deeper, let’s talk a second about Washburn as a brand. Without any wikipedia checking, i think Washburn is a US brand that moved all of its guitar manufacturing to korea back in 80’s. Those korean made guitars were still very good guitars (which i know from personal experience). In early 90’s, the brand was still somewhat prestigious. The following ten years basically killed the brand. Since the earlier products sold under Washburn brand were actually good, the reputation carried on. But. In 00’s the not-so-ingenious heads at Washburn decided to provide even cheaper guitars. We all know how that works out. Compromise the quality to get the price cheaper. That’s what happened. All new Washburn guitars i’ve touched since 2005 have had nothing to do with the guitars that were made ten years earlier. The crappy guitars left everyone believe it was just one of those super cheap, super bad brands. I think there are not many people who know that the brand’s earlier work was more than sufficient in quality. Even if they did get the quality back on upward track recently, the facts still leave the brand not wanted.

Turning this unit around had one really funny detail. 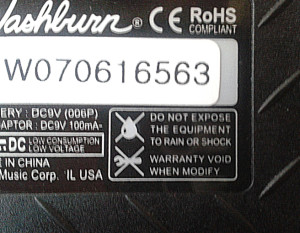 “Warranty void when modify”. That’s basically an invitation to tweak the $20 pedal. But once opening the unit up… No. I want to screw the bottom plate back to its place and try to sell the unit for the price i got it. Which will be next to impossible (and didn’t happen. It did cost too many currency units me to take these crappy photos…). This kind of utter crap lands on my desk rarely. And that’s what it is. Utter crap. 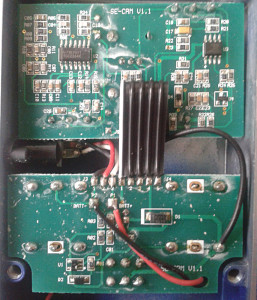 I don’t mind about all SMD, but just look at it. Worst build quality i’ve seen to date. I wouldn’t dare to take either of the boards out, as that would definitely mean that something would break. Washburn already burnt all bridges with the guitars later than 2002, now they are making OEM deals with korean brands that outsource their bad build quality to even way worse chinese manufacturers. Do any of you think that i would feel good about playing my 1993 Washburn at a gig? Everyone will be looking at me like “why’s that dude playing with $50 guitar?!?”. I know my 1993 guitar is very well made and it sounds very f*n good. But everyone in the audience will only see my playing a “cheapest brand” guitar. Thank you Washburn for all your lousy decisions. If you want to wreck your brand – follow the example of Washburn. Buy Artec design, badly made in china and sell it for more than korean Artec box. Yeah. Everybody loses.

How does it sound?
Horrible disfigured hybrid child of Marshall Bluesbreaker and a Ibanez Tubescreamer. Mid-honking it’s way through with broken sounding clipping stage. The EQ controls won’t help you out of this mess either. It is definitely the same box as Artec blues overdrive. If you want a Blues Overdrive, look at anything else than Artec/Washburn. Anything else. This unit sounds like a toxic waste that you won’t ever be able to get rid of (gladly i did get rid of it). Of all the overdrives i’ve played with, this is without a doubt one of the worst. Simply put. It is Bad.