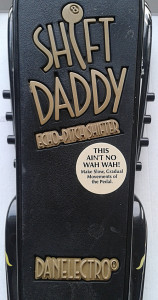 What is it?
Danelectro DSD-1 Shift Daddy Echo Pitch Shifter from original series of rocker pedals. Made in china around late 90’s.

I must admit that i was interested. And local music store happened to have one left behind. The unit had seen better days as it had sat in direct sunlight for years. Still unused, but with visible ageing and discolouring. The photo below may not seem much, but the flames should be in a lot deeper red. Otherwise the unit is in great shape. 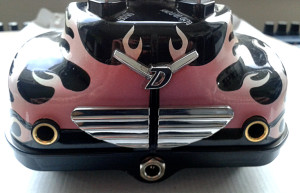 Had to snap a shot of the tail lights too. Some dust around the edges, but nothing that a moist rag won’t fix. 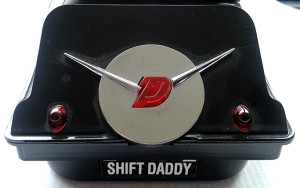 What comes to the features of this unit, we have something not so common. Or that’s how it seems at first. Sticker with “this ain’t a wah” suggests that we are in for a treat. Sure there are a few Danelectro designs that are out there and this does apply to Shift Daddy as well. Echo Pitch Shifter. What comes to mind first is a weird digital effect with mashed up features borrowed from Boss pitch shifters and delays. But actually. No. Although some may consider these as valuable tools, and are amazed by the weirdness, i must disagree to some degree. 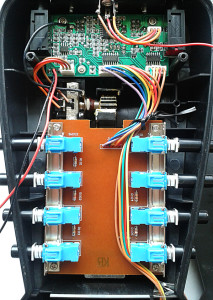 Why? Because once i fired this up, i knew exactly what it was all about. The rocker simply controls the delay time of a PT2399 chip. So in other words, this is nothing more but a quite standard delay design where the delay time setting has been moved to a pot controlled by foot. Rest of the pots (feedback and mix) are replaced with push button switches that look like exhaust pipes. So in fact, there’s nothing even resembling a real pitch shifting effect. Just basic delay unit. 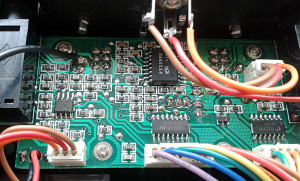 There you have it. I had certain hopes for it, but those all got stumped when i played with the unit. And checked the insides. From the feature point of view, this is sadly the dullest one in all three rocker pedals ever made by Danelectro. You know, there are real tool like delay units that accept the use of external expression pedal for the delay time. Usually those are way better all digital designs too.

How does it sound?
Decent, but not much to write home about. It’s a delay. Nothing more. And it’s a digital PT2399 based delay, so do not expect anything else. It does what it does in a good way, but there just isn’t nothing special about it’s tone. The delay time range of the chip isn’t that great for this type of application. When the delay times goes from something like 40ms to 400ms, the sweep acts just way too fast and this makes it just plain annoying to use. It’s not a pitch shifter. Just a delay with time control on a rocker. And it doesn’t do even that feature extraordinary well. Disappointing, but there is still a bit of Danelectro magic in there. Not the worst, but not good. Proceed with caution.