Let’s start out with underrated, yet obvious classic. 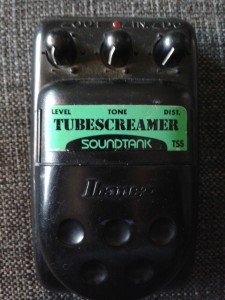 What is it?
Ibanez TS5 Tubescreamer from Soundtank series in plastic enclosure, made in Taiwan around 1992-1995

This unit has serial number starting with 107, which suggests that it is early Taiwanese Tubescreamer with plastic enclosure. I’m not 100% sure about the serial numbers and how these tell the exact date, but the metal boxed Soundtanks i have all have their serials starting with 001 and the newest plastic one i have has it’s serial starting with 424. All Soundtanks have 6 figure serial numbers. For being from the early half of the 90’s, this unit is in fair condition. Like most of the tanks i’ve ever had, this one had bad connection on its switch. I swapped that for new Alps drop-in replacement and it is playable once again. The 9V battery snap was apparently broken somewhere along the way. It was replaced with cheapest possible soft headed snap by the previous owner. The wires were soldered on to the original snap’s wires. Nothing wrong with that – but the new joints were insulated with office friendly see through tape. I also swapped the snap for hard shell one and used some heat shrink to get it neat. 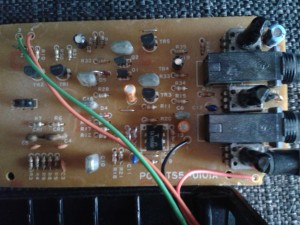 As the photo shows, the board has TA75558P chip in it, which makes the board exactly 1:1 with current Maxon/Ibanez TS9 reissues. Yes. I’ve though about modding it. I won’t. Because of the reasonable condition and early serial, i’ve decided to keep this one as original. I could try to score another one and replace the chip with JRC4558D on that one – and of course, swap the two resistors at the output to make it TS808. Update! I bought another, newer unit in worse condition than this and modded it to FYA Electronics Arrow mod specs.

Schematic and tons of other information, plus many DIY projects on this circuit are widely available. Since the circuit is exactly like all the other Tubescreamers, i’d suggest that you read more about it from geofex’ classic article, “The Technology of the Tube Screamer“.

How does it sound?
Well. What do you expect? Circuitwise, it is 1:1 with TS9, so it won’t sound anything different from new store bought TS9. It sounds reasonably good, even with the expected mid hump, harsh unnatural dynamics and relatively low output level.  Output level is my opinion – TS’ are not boosters, but they do have sufficient output levels that go easily over unity. This may be heresy, but i’ve never been too much of an fan of Tubescreamers. There are a lot better overdrives out there. But yes. This one sounds 1:1 with TS9.