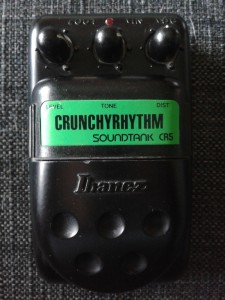 What is it?
Ibanez CR5 Crunchy Rhythm from Soundtank series in metal enclosure, made in Taiwan around 1989-90.

It is a design that differs from usual TS and/or Voodoo Labs overdrive topology. Boosting, bluesy overdrive with discrete differential pair to determine which parts of the signal get to Si diode hard clipping before the tone driver. Since the 70s and early 80s, it’s been hard to come up with even remotely original overdrive designs, but this one has some out of the box thinking incorporated. Schematic can be found on the 8bitsindgenug site. It is well worth taking a look for what’s happening in there. The gain/distortion stage makes me smile, as it’s definitely something you don’t see in every OD design around.  My unit is in a metal case and has very small number as a serial. I think it’s safe to assume that this particular unit was made in 1991, when the first (metal boxed) Soundtanks were introduced to the public. 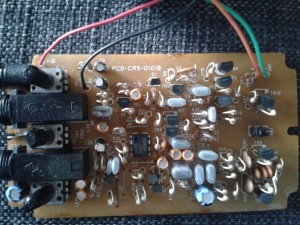 JRC4558 is there to drive the tone control and other half is used as output buffer. Not sure why the IC half is used as a buffer, as it could have been just as well used as the first gain stage – instead of the lone 2SC1815Y that drives the differential pair. This is part of the reason i care deeply for Ibanez boxes. Even the commercially dullest, most underrated pedals can have good sounding, innovative stuff inside them.

How does it sound?
Not too far off from likes of Boss BD-2, even though these two designs are completely different. Resemblance to few other “dumble” styled overdrives should be mentioned here. It has good output level, and real nice, softer texture to the dirt. It keeps the frequency responce well in tact, so it can be used as a really good sounding preamp in beginning of your effects chain. All that in a metal box that just rocks. This model is getting rarer every day, especially the one in metal enclosure. So if you get a chance to score one for cheap – do it without hesitation. It will be worth it. Definitely one of the greatest boxes in Soundtank series.