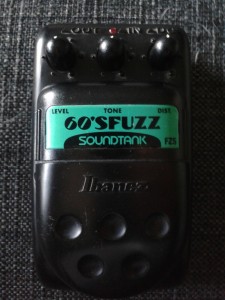 What is it?
Ibanez FZ5 60’s Fuzz from Soundtank series in plastic enclosure, made in Taiwan. Manufacture date unknown due to missing label that’s been ripped off by velcro at some point before this landed to my care (Grrrrr!).

Techically pretty close to Ibanez OD850 and OD9 (which are damn close to BMP), with some value changes to every single spot of the design, plus completely rewritten tonestack and output driver. The design has remained, but the 60’s Fuzz has been around as metal boxed SF5, then plastic uniform typefaced FZ5 and finally this – FZ5 with its own font and Soundtank “logo”. I’m thinking about getting another one of these, preferably metal boxed one to keep as original and tinker around with this individual. Mainly because i can’t trace this unit back to it’s origin without the serial number. I could take closer look at date codes on components, which should give out estimate that should suffice. Either way, this one is from newer manufacture date, probably from 96-98.. I’m quite interested about modding one to OD850/OD9 specs. This time that won’t happen with just swapping components. The board will need some work too. 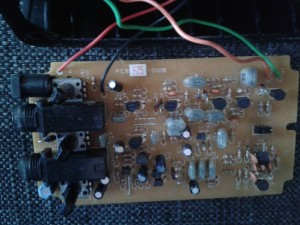 Good thing there’s room on that board. Note the sticker placed on the PCB label. As stated above, the design used to be SF5, so the PCB type remains as such – only with a sticker saying that it is now “FZ5”.

How does it sound?
Not too great i’m afraid. May be because of the tonestack, but it literally sounds like BMP held down by pack of wild horses. The fuzz is in there, but it’s on the brink of choking to scon at five o’clock tea. It’s a Fuzz. Wich is a good thing. Modding some other companys work should always mean that the end result should be better than the original. This is not the worst effect i’ve had, not even the worst i’ve seen this year. Still nothing to write home about. Probably marketing guys at Ibanez wanted it to sound more mainstream than BMP/OD850, which resulted in adding modified tone control that sucks the life out of it – and other fault is leaving the recovery gain too low. Funny thing is that you can get modern BMP reissue for a lot cheaper than this. One of the few bad (re)designs in Soundtank series. Good to have, but as it is.. Don’t see myself using it a lot.