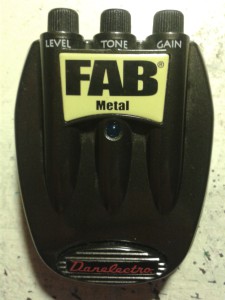 What is it?
Danelectro D-3 Fab Metal. Fab series, made of plastic and probably the cheapest thing you’ll ever see.

For some reason i seem to gather metal distortions even i’m not a big fan of metal music or the guitar sounds commonly affiliated with it. I do think it’s fun to play with metal distortions at home though. So while i’m gathering more of the missing Danelectro boxes that i want, these tend to arrive in the meantime. Where mini-series boxes vary in build quality, these are very consistent. Consistently bad. As new units currently sell for 15-20€, it is no wonder the build costs have been cut in every single step of the way. Not to say that these wouldn’t work. They will, probably until the end of time. But the board is shielded with a piece of paper that has a layer of tin foil on the other side. Magnet for radio frequencies and manifestation of bad business orientated thinking. 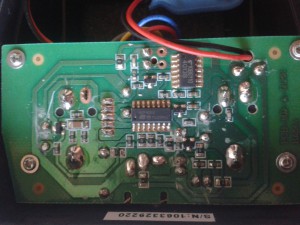 There’s flux residue all ovet the board and soldering looks astonishingly bad. I always have hard time looking at component selection that’s mixing SMD and thru-hole components. Plus the board design looks like a winner of “who can whip up a quickest PCB design” contest. Auto-router is another possibility here. Not eye pleasing at all. 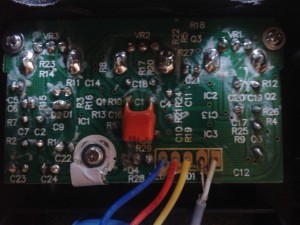 I can say with certainty that Fab series isn’t designed for active guitarists, but those who are starting to learn guitar – a perfect way to kill the starting enthusiasm for tone hunting is with these pedals. It could be argued if Danelectro should have released these at all. In my opinion, they shoudn’t. These hurt the brand and spread misconception that all Danelectro boxes are made with same (lack of) integrity. 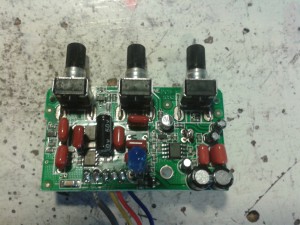 The design itself is your standard distortion with gyrators and multiple gain stages. Mr. Jones has drawn a schematin in 2006. This doesn’t have component values listed, but i suspect this may not be prime suspect for cloning or modding…

Like stated, the build quality alone make these very much undesirable boxes with no value at all. May the designs inside be how bad or good ever, you’ll be a lot better off with modern chinese cheap brands than these. These may be slightly cheaper, but still. Wouldn’t recommend this series to anyone. This may be the point where i draw the line. I have nothing against Mini series or plastic Soundtanks. These have been created to make money. If the retail prices are as low as 17-22€, you can imagine how much time, effort and quality gets in to the final product.

How does it sound?
Awful. Didn’t have very high hopes for the unit, but as a metal distortion, it sucks. However. Once the gain is maxed, this turns into digital sounding fuzz rather than metal distortion. Which isn’t good, but it may have some use in certain situations. As a guitar effect? Avoid this like a plague. As a power electronics noise tool? Maybe.

And no. I won’t be finishing my Fab collection. Ever.