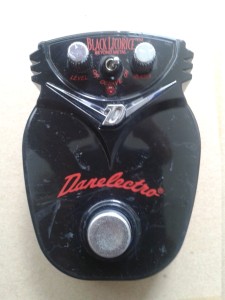 What is it?
Danelectro DJ-22 Black Licorice, Beyond Metal from Danelectro Mini effect series.

While many designs in the notorious mini effects series are surprisingly good and most of the designs have some really nice tweaks or upgrades to some other, known classic circuits, this one disappoints in so many ways. If you didn’t know already, i’m somewhat a freak when it comes to octave down effects. As some of you may know, the most common way to create down octave divider sounds is to drive the hell out of  CMOS flip-flop IC. This one is not an exception to that rule. Design reminds me of also notorious MXR Blue Box. There’s something very wrong with the distortion design and the way it handles lower and mid frequencies. Board also feels way too crowded to bother with modding it for more pleasant frequency response. 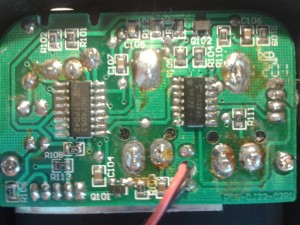 Standard mini plastic enclosure, crammed with substandard soldering. Toggle switch bypasses the octave dividing circuit, which acts pretty much in the same manner as Blue Box’s blend control. Next paragraph will tell you why i didn’t dig any deeper to what it does and how.

How does it sound?
Bad. Honking, plasticky and thin, despite the basic octave divider circuitry. Where Dunlop’s Blue Box sucks with its way too low output, this one sucks with everything else. Divided octaves sound reasonable good, but the distortion part is just bad. Worse thhan Fab Metal (more on that later…). Definitely one of the worst (re)designs in this series. Wouldn’t recommend it, unless you are a true down octave aficionado. And even then. This may be good only for trying it once. My first encounter in this series that sounds exactly like it looks. Too cheap. This may be the one Danelectro effect that won’t ever let you get your pennies back.