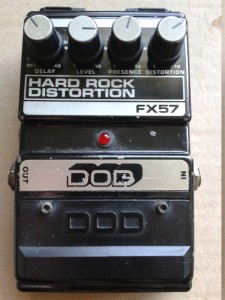 Bad year. 1987 i mean. According to DOD information heaven, America’s Pedal website, the basic idea for this design was already tried out on certain DigiTech double pedal, as well as on one Boss design. And what is this idea? To take a OD/Distortion and place a delay circuitry after it to “widen” or “thicken” the sound. I must say that the idea itself doesn’t sound that bad. Distortion with analog delay? How could that be bad? Well it can. For those interested, the schematic can be found online at Schematics Unlimited. It shows that the delay section is placed  after the main gain stage and to be mixed back to the distorted signal at the level control. The delay itself is created with MN3007/NM3101 pair. Level control is mixing the signal, delay included or not, with virtual ground and passing it to the presence control. The distortion control is basically just a variable resistor limiting the input signal current after the mandatory input buffer – which is needed due to basic DOD electronic switching. There are two trimmers that affect the delay functionality. 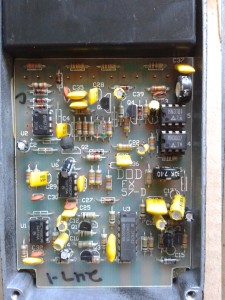 The board looks kinda cool with those yellow mylar caps.

Now what exactly makes this a bad design? Two things. The distortion and the controls. That is a lot for one design. With the soft clipping, placing four Si diodes to the feedback loop of the gain stage offers something that isn’t too far from tube screamers, but the filters and second clipping stage (the Ge diodes) before the volume control gives out texture that isn’t too desirable. And that presence control would need a huge rework to even remind me of anything reasonable.  I personally think that presence is just a wrong word for this control. It should rather be “extreme bass cut pot that we here at DOD didn’t think all the way through”.

How does it sound?
Bad. Thin, hollow and nasal. Turning the delay off doesn’t quite help you. With the distortion at minimum and delay maxed, we can get something that reminds one of usable sound. But it is pretty crappy sounding design. Not all the settings are awful, but none of them are particularly good wither. Overall experience is so crappy, that i have high hopes for this becoming a rare gem – due to low(ish) number of units manufactured in relatively short period and the fact that some people will dispose their units with their everyday garbage. Which wouldn’t be too crazy idea with this particular unit. Not all of the setting combinations are horrible, but in genereal; it sucks and it sucks hard. But it is an interesting failure.