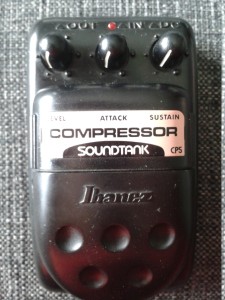 What is it?
Ibanez CP5 Compressor from Soundtank series in plastic enclosure. Serial points to somewhere around ’95-97. Date is based on a educated guess, as always with these.

First off. Ibanez compressors tend to use somewhat obscure OTA replacement in a few designs. The 9-pin  SIP-chip in question is BA6110, which is in fact a VC opamp. The datasheet doesn’t have a word about transconductance. It does talk about voltage controlled amplifiers, filters and oscillators. While the chip is way different from the obvious CA3080(A/E) found in MXR Dyna, Ross Comp and about a hundered different derivatives, it can do the same thing. Ibanez uses the same SIP-chip in only tremolo it ever produced, the TL5 – only there the VCA is harnessed to be used with LFO instead of controlling it with the input signal’s voltage. More about the tremolo once we get to it.. This post is about the compressor. 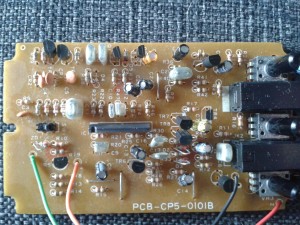 To study the schematic, you can check it out on Dirk’s page. His trace is beautiful work of art as always. All the other stuff going on with the circuit are relatively close to Dyna/Ross, so the base design is and isn’t a ripoff at the same time. I’m not quite familiar where in the Ibanez/Maxon design timeline did the BA6110 chip arrive, but it seems that the Master series CPL was the first one. Followed by CP10 and this circuit. Which are, all three of them, pretty much the same thing. In other words, an VCA adaptation of CP9, which uses more traditional LM16900 dual OTA. Which is, CP9 i mean, actually Dyna/Ross comp with dual OTA (second half unused). So the histroy behind this Soundtank CP5 is pretty clear. This time, the design revamped by the Maxon/Ibanez  team is better than the original.

I can say this with confidence. All four mentioned above do work and sound a lot better than currect Dunlop/MXR version of the Dyna.

How does it sound?
One of the great ones. Where as MXR Dyna is a lot more like shock effect with it compressing way too much even on minimum settings – This one can be used on all the time without excess noisy mushiness. Of course it can be turned to the max, which makes it quite close to Dyna. In a few words – Really good sounding compressor with classic feel to its sound. Doesn’t give you as much noisy mush as CA3080 designs, but good compression that thrives with a telecaster.