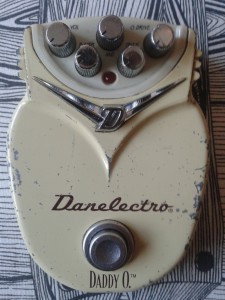 Got mine through ebay for a very reasonable price. Some natural road worn, sratches and paint chips. It’s good only either in this condition or as a mint. Quite happy with aesthetics. Inside, there are two boards screwed on the very sturdy design enclosure. I think these could easily outlast humankind.

Neat and well designed board. According to russian trace of the unit from 2003, topology goes as follows: Input buffer taking care of the bypass splitting -> variable gain stage -> another gain stage -> hard clipping LEDs -> three band tone control -> volume control -> output buffer. Pretty standard stuff. Vref voltage is divided with 4K7 resistors, so i think that draws more current than it would need. 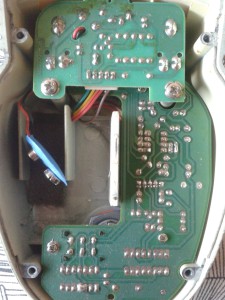 Schematic is not too far off from some Marshall designs like Drivemaster and Bluesbreaker, but there are differences. Traces are modern, but still look eye pleasing and neat. The construction and soldering also look like it’s done the way these should be done. Don’t know why these units have such a bad rep as they do. They are well made and they sound…

How does it sound?
Really good. Due to it being close to designs mentioned above makes it very usable with its 3 band eq controls and nice range of gain from mild overdrive to distortion. It is a redesigned Marshall, and it is at least as good as its predecessor. And what kind of distortion? Think of original Marshall Drivemaster making out with Mad Professor Sweet Honey OD with added 3 band EQ.  Very underrated overdrive pedal. One of the greatest examples why Danelectro pedals appeal to me.

2 thoughts on “Danelectro DO1 Daddy-O Overdrive”