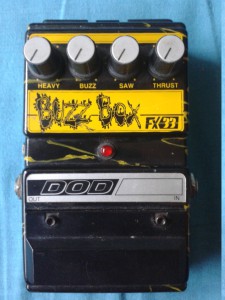 Now here’s something you won’t see everyday. When something is worth overdoing, let the DOD engineers show you the real way of the beast. Design is just sick. The America’s Pedal article on the history of the design is a very good read. There is a schematic available online, named Leafblower. It’s drawn by Celadine and it is spread accross two pages. It’s not that complicated, but still a big design. 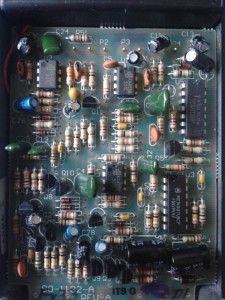 So in fact the design has distortion and octave divider in parallel, which is nothing too special when compared to other low octave divider circuits around. But this time the voicing and gain are set quite perfectly for extreme buzz. The controls work well, even though the names are gibberish. Heavy is controlling the mix between distortion and low octave output, Buzz acts as distortion control, Saw as tone and Thrust is your overall output level. 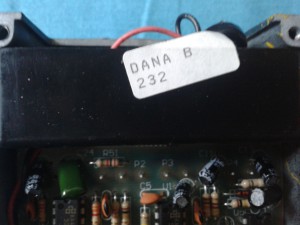 As a nice curiosity, there’s a sticker inside with ” Dana B 232″ printed on it. These units usually sell for a lot. I happened to be quite lucky and got one from a friend in a trade that was good for both of us. Thanks Markus.

Due to the circuit being more complicated than its peers, it’s not your average suspect for cloning. After all, there are three dual opamps and a CD4013 flip-flop in addition to a few transistors and clippers. But from economical point of view a reissue should be welcome.

How does it sound?
Massive low octave noise monster. Some folks claim it to sound like a Rat driving a Bluebox, but to my ears it’s not even close. Think of two DOD Grunges in parallel and blasting the resulting hyper distorted signal through quadruple bass booster that has all the frequencies divided into lower octaves ála Bluebox. Yes. It is that sick. in the same time this sounds like a mash of a leafblower, a vacuum cleaner and a demon possessed NES system on speed.