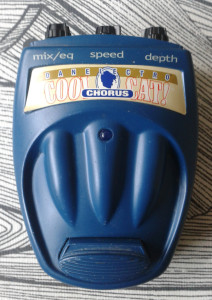 What is it?
Danelectro CC-1 Chorus from Cool Cat series, made in china around 2004.

Got this unit used for a very reasonable price. That reasonability ended once i openend the parcel. Bottom was velcroed and the type plate was long gone. Those do not contribute to the sound in any way, but i’m usually after pedals that are in good or better condition (unless they are more rare and more collectible). As this series is not at the highest spot on my collector’s list, i think i can live with the faults. It is quite interesting how and why most manufacturers choose blue as a colour for their choruses. Dark or light, but most of them are blue. If not blue blue, then light or dark, but still blue. 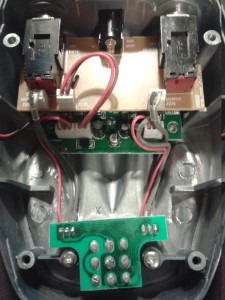 The Danelectro method of creating effects has mostly been interesting. If you take a look at any board from the “original” series or from mini series, you’ll notice that the boards are designed and cut per the enclosure. Rather than making the enclosure to house the circuit. In this case the two stacked boards are really small and leave a room for a battery in the middle.

Next issue i’m  going to need to raise with these boxes is the switching. Danelectro had a long experience in electronic switching which wasn’t that bad at all. Only couple of the mini series boxes were reported to be sucking the bypassed tone, but when we leave the plastic momentary switch solution aside, the switching was (and still is) not bad. So the choice to go for sometimes unreliable 3PDT standard true bypass leaves me puzzled. Will it make the effect better than its electronically switched, buffer bypassed peers?

How does it sound?
Good with quite wide range of settings.  it has your standard depth and speed controls in addition to “mix/eq” control which acts more like a mix than eq. Nice cheap pedal. Nothing to shout about, but well working and reasonably good sounding chorus. Small footprint for pedalboards can be counted as a plus.