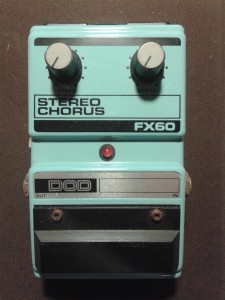 For some reason i find this unit simply beautiful. Seafoam/baby blue colour and simplicity of two knobs. Even the straight DOD logo suits this look very well. For aesthetics, this is one of the finer examples why i happen to like these FX series pedals so much. There is an old factory schematic available online which doesn’t quite match this unit’s version. 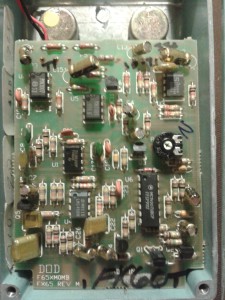 3101/3007 design. Basis of the design has remained, even though there are reportedly at least five different versions of the board. At least the delay section with that particular BBD pair is the same on all of them. This unit is the second latest board design, sharing the board with FX65. Which i do find intriguing, as the stright logo label would have us to believe that the unit would have earlier board in it. Ah, the mysteries of DODs. More quirks on the FX60 and all the different board revisions/versions – read about them on the DOD information heaven, the America’s Pedal site.

Overall, it has your standard controls of width and speed. Both having nothing but usable parts on the range.

How does it sound?
Mellow and soft. Like a good simple analog chorus should. There are no extreme settings, but just plain and simple warbling mild chorus. Very usable, but with no recognizable personal character. For a cheap DOD pedal, you really can’t or won’t go wrong with this one. It does sound very good, but doesn’t make it in to the top three for me.