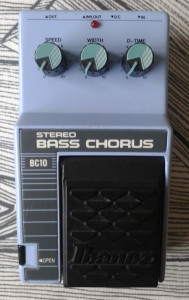 What is it?
Ibanez BC10 Stereo Bass Chorus from 10/Power series. Made in japan around late 80’s.

As with CS5/BC5 covered earlier, the circuit is more or less verbatim with CS10. Funny. Four pedals equal one design, or the other way around. And the colour is… Slightly darker-or-more-violet-than-SC10-blue. As with its guitary brother, SC10, the BC10 has also three controls. With, Speed and Delay Time. If i haven’t written it already, the controls stand for: Width – the intensity of the LFO sweep affecting the delay circuitry, Speed – this one is changing the LFO speed and Delay Time – affecting the length of delay getting swept by LFO and BBD clock timer. 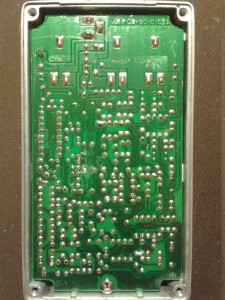 Modern board with modern traces. Very neat and professional soldering. The board size is not larger than what we find on Soundtank series, so it’s funny how the board here looks this crowded – even with LFO moved on the control board. Stereo output inverts the phase, so once again i’d recommend to try it as a stereo device. 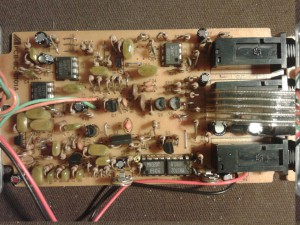 The component side says it all. 1:1 board to SC10 Super Stereo Chorus. Some of the cap values are different, but otherwise the design is verbatim. 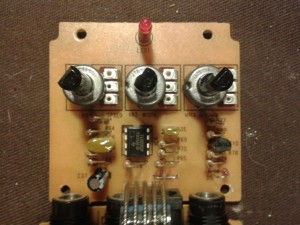 Upper board shows the LFO and controls. The controls are not complete workalike of SC10, with mild differences on the max speed and width. This may be diue to component tolerances and if so, the individual boxes of the same product will yield slightly different results. Damn i’m loving the analog circuits.

How does it sound?
With the minor differences on the circuits, this one sounds and feels pretty much the same as SC10. Just slightly fatter. If i place all four of these in series (CS5, BC5, CS10 and BC10), the differences are very minimal. Which is interesting and fun. Maxon engineers could have just created one circuit, preferably the one found on this one (BC10) and use that board and design for all the rest.