Let’s have a full month of posting only choruses as pedal pots. Why? Because i can. 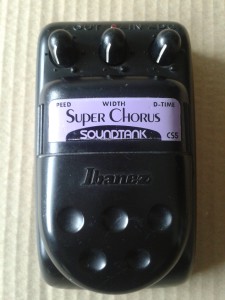 What is it?
Ibanez CS5 Super Chorus. Soundtank series unit in plastic enclosure, made in taiwan in mid 90s.

I may not be the biggest chorus user there is. I’m really not even sure how and where i would use one. Of course, i’ve used a lot of choruses while recording, but mainly for opening up some synth tracks, rather than using them with guitar. Choruses lie somewhere in the middle ground from vibes, phasers and flangers. There’s always an LFO that creates the modulation pulse. Which then usually controls the delay timer, which then controls the delay itself, creating sweeping chorus effect for the pre and post effect mixing amplifier. 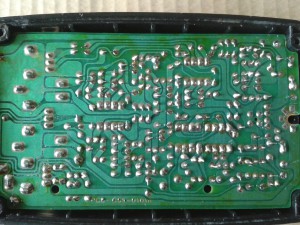 Ibanez CS5 Super Chorus is no exception. TL022 as LFO and NM3102/NM3207 pair for analog delay. 1458 takes of the mixer duties. Circuit is quite standard for a chorus, expect for the delay time control, which adds a lot of versatility and definitely is not as standard control as width/depth and LFO speed controls. Guess that’s what makes this Super. For those interested, the schematic is up at SchematicsUnlimited.com 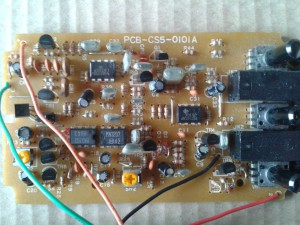 To me, it looks like the design is very close to Ibanez CS9 Stereo Chorus, but with added delay time control. So in a way, this is better than its great predecessor.

Board, design, traces and components are well in line with the better standard boxes of this series. Only culprit is – you guessed it – the switch. After swapping it, this one runs like a very nice charm again.

How does it sound?
Good. With these controls, it is very versatile sounding chorus that can do both, hard and soft chorus from fast to slow, from natural to harsh. Basically the sound that makes this one very nice effect, even if it is housed in a plastic box. One of the greatest designs in the series.