What is it?
Boss MT-2 Metal Zone Distortion. Made in Taiwan in january 1999.

While the design seems to be quite a standard for metal players, it doesn’t move me that much. The eq section with half parametric mids is well designed and definitely the best part of this pedal. The schematic shows that the design is probably one of the biggest analog distortions around. Several gyrators in addition to several gain stages and fairly complex EQ. These are the things your Metal Zone is made of. 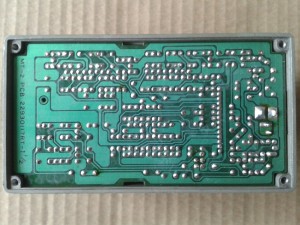 SIP opmaps on a crowded board with modern style techical looking traces. The board material makes me wonder if this unit is in fact older than i originally thought. When i hadn’t checked the serial number decoder to confirm… 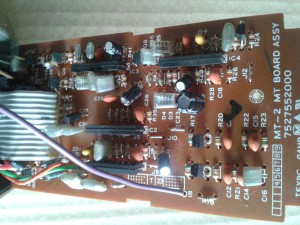 Due to the price of used units this will probably never make it to DIY favourites. Maybe it is just a good thing. Too much of gain may not always be an advantage when the goal is to keep the sound reminding you of a guitar. Besides the EQ, the controls are Distortion and Level. Latter is good to have as this one can reach the unity level in early part of the sweep. For distortion control.. I have no clue why it is there. There’s basically 269 degrees of unusable area on the sweep.

To me it seems like this design has been sort of an competition. How much distortion and gain can you get out of 9V operated pedal without oscillation or massive noise content?

How does it sound?
As your standard ultra high-gain distortion with reasonably loud output should. This sound has been more or less the standard for ripping death metal since its inital release in 1992. EQ section adds a lot of usability, while the distortion control is completely useless. Or have you ever heard or seen someone to use MT-2 with minimal or even moderate distortion setting? I sure haven’t.