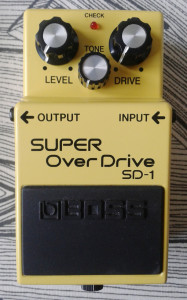 One of these boxes that i knew i had to have, no matter if i like or not. And the answer is not. Must be one of the most sold Roland Boss pedals ever. The design has been on the market since 1981. As the box has already reached 30 years of age without any changes to the design, it must be popular product. If it wasn’t, it wuold have been axed and/or replaced by some other design a long ago. Cool thing about the circuit is that it still looks and feels pretty much like the original japan made SD-1s, even though it’s taiwanese and nearly 30 years younger. 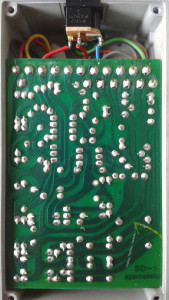 One of my friends has an early 80’s japanese version of the SD-1. According to him, the current production versions sound exactly the same, if not better. Haven’t had a pleasure of trying out really old unit myself. Value of those early 80s versions are through the roof. So i’m kinda hoping that 25000 of these units suddenly break up beyond repair and that 25 years passes very quickly. Maybe then my unit will have more value than twenty european dollars.

The board traces are the same as the photos of old units found on the web. Let’s then take a look at the schematic (from hobby-hour.com). Doesn’t that look a bit similar to something we’ve seen before? With just a couple of component changes (a few values, a 1M pot for gain and asymmetric clipper diodes), and it surely does seem like something really familiar. 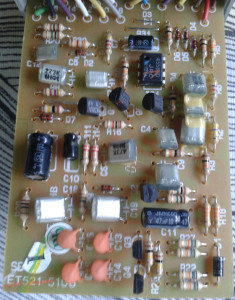 Funny. I thought it sounded and felt pretty familiar too. So in fact, it is a slightly modified Tubescreamer with added gain and asymmetric clipping. The pedal is so common that modding it is very popular. No one will ever cry after an original SD-1 because of the mods. One can simply use the mod sheets found on the internet that apply to TS-family.

With just couple of component swaps and one could easily mod this to TS808 specs. Sounds so bad as an idea, that i may have to aqcuire another cheap used unit and mod it to 808.

UPDATE. I did get another from around 2005 in a trade (thanks Kasperi!). And i did mod it to TS808. All it takes is removal of one cap, swapping the places of one resistor and a cap, swapping 25 components to different values (including two pots) and making a few slight modifications to the circuit board. In all, about 30 components need some attention. Doable, but it’ll take couple of hours to perform. I A/B’d the result with my TS9 (as i don’t have TS808, yet), and i really couldn’t tell which one of the pedals was on at a time. So yes. It can be done. Do i recommend it, or is it really worth the trouble? Can’t say for sure, but it feels pretty damn weird to have TS808 sound coming from SD-1 box. After trying the result out, i sanded the SD-1 text off from the label and used permanent marker to tag it as “SD-808”.

How does it sound?
Like a Tubescreamer with slightly more harmonics on the clipping due to asymmetrical clipping configuration. Oh. And lots more gain.  Does it sound better than TSs? No. But it doesn’t sound any worse either. Mid-humping overdrive that keeps slapping you on the top of your head. Doesn’t take good pickups well, jsut slaps you even harder. For P90s with  moderately low output, this shines. As do all the TSs. A classic, but not that great. I do get why some people do like this and keep using it. To me, it’s just another cheap TS alternative in yellow box. Swap the diodes for two silicon ones for symmetrical clipping and you’ll have something that’s close to a Tubescreamer. that’ll cost you a lot less than current reissue of TS9.