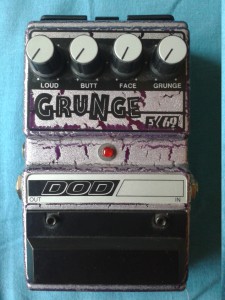 The DOD engineers were probaly after the sound of Kurt Cobain’s Boss DS-1/DS-2 and the Mudhoney fuzzes that were taken over the top. Or then it was just a plan to make a lot of money out of the genre that hadn’t too much to do with the pedal’s sound. There are conflicts between the sources about mr. Cobains use of this make. I personally feel that the most accurate version of the truth is told at Kurt’s Equipment website, stating the Nirvana’s guitar tech as a source for the information. So the throwing the pedal at the audience is probably just a myth. May it be what ever. Let’s check the pedal itself out and not focus on who did what 20 years ago. 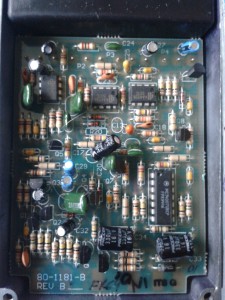 There’s standard DOD electronic swithching and lots of gain stages and filters. Schematic is available online and it shows the signal path to be buffer -> filtering gain stage -> passive filter -> main gain stage -> hard clipping -> dual gyrator filter stage -> tone control (active lows and passive highs) -> one last driver for tone control -> output buffering. Yeah. Simple. But all that is needed to create horrid amount of gain and keep the audible oscillation and too much excess noise from completely ruining your sound.

So it’s a fairly complicated super high gain distortion with reasonably good eq section. Does it really depict the sound of the genre? Probably not. DOD already had numerous “metal” pedals in its lineup. What makes this all special is the fact that marketing is completely in reverse. Most of he ones that are branded as metal distortions are lower gain devices and FX69 Grunge is definitely at its best when used for metal distortion tones. Now, who of you metalheads want to use pedal with “Grunge” written on it for your lead sounds? How come i see no hands raised…

How does it sound?
Weird. At the same time amazingly good and utterly bad. Very few “standard” designs leave you feeling this baffled. Maybe it’s a good thing to get feelings out of a pedal. At least it does raise an opinion out of almost everyone. You’ll either love it or hate it. There’s no meh-factor on this one.

If you are after that buzzsaw sound, then the Grunge may be just the right pedal for you. It’s even underrated and highly praised at the same time. DOD grunge – the paradox of all well selling pedals. I’m basing the sales argument on the fact that Digitech is still selling the same circuit on its D-series, which makes the design over 20 years old and it has apparently been on the market since the initial release in 1993.