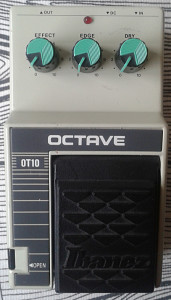 What is it?
Ibanez OT10 Octave from Power series. Made in taiwan around late 80’s.

The most interesting Ibanez boxes are the couple of designs that only occur once. There are more examples where the designs have lived on in different series with slightly different names or very slight differences. For example, all the different Tube Screamers and metal distortions. Where as TL5 Tremolo from the Sounstank series is the only tremolo effect Ibanez ever produced, the OT10 Octave is the only octave effect offered by Ibanez. These are bound to gather some noticeable collectors value. Box offers up and down octaves that can be mixed with the clean signal. The clean is the same as bypassed signal. Trace design isn’t looking too beautiful, but there’s nothing wrong with it. Just your standard modern style traces. 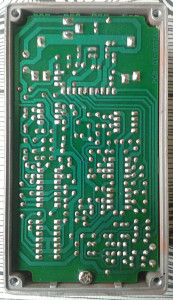 Like all 10-series boxes, there are two circuit boards. One with the controls and one as the main board. Boards are connected with 10 stranded ribbon cable. All three pots are 100K Ohm linear taper PCB mounted carbon ptos. The ouput buffering  and part of the electronic switching network is also placed on the control board. The schematic is up online. Once again, it’s Dirk’s beautiful trace, which is simply amazing work. 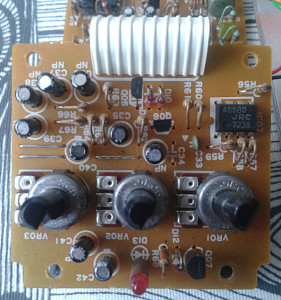 The buffering aside, the signal is splitted into three and fed to down octave divider, up octave circuit and a clean channel. Down octave is created by standard method of driving the s*it out of 4013 CMOS chip by one quad opamp. Upper octave is done by two diodes and wonderful looking inverting/non-inverting amplifier pile. Clean comes through with single unity amplifier. 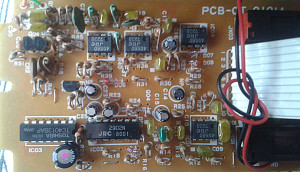 All this is is mixed with three pots and passed on to last filtering buffering stage. I think the design is quite elegant and still far off from the circuits considered standard, like Boss OC-2. The design clearly has potential, so it makes me wonder why Ibanez (or Maxon) didn’t pursuit the idea further..

How does it sound?
This might be the main contributing factor why OT10 remains the only octave effect in Maxon/Ibanez back catalog. Up and Down octaves are both relatively clean, with the low one being just as unstable in frequency tracking as it usually is with octave dividing designs. The box does get way better if driven by some angry fuzz or distortion. While both octaves have their own personalities and the box sounds generally good, i see why this wasn’t as big of a hit OC-2 for example. Good thing is that those who have the box usually know why they have it – it has more than just collectors value. It’s quite usable. It has more going for it than just plain two different octaves. Character. Wouldn’t use this on my board as everyday octave box, but it’ll be with me in the studio. Every time.