Ah. Back to the old tricks with yet another Tube Screamer. 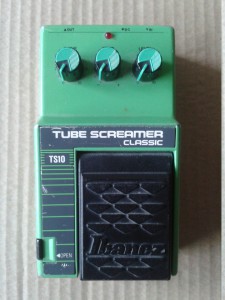 What is it?
Ibanez TS10 Tube Screamer Classic. Later version, made in Taiwan late 80s or early 90s.

So it is TS9 with one resistor added before the inverting input of the opamp. These taiwanese units tend to sell for less than current TS9 reissues, so modding one might not be such a bad idea. Personally i’m happy that this post leaves me only with TS7 to cover from the standard tubescreamers – as it gets quite boring to try to find something to write about a box that one has written about twice already. TS7 has something more to offer than just one added 220R resistor. 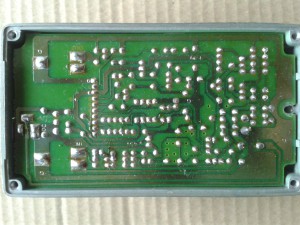 Dull as expected. In more ways than one. The enclosure may not be as sturdy as 9-series boxes, but for some reason i find this type of box soothing. Featurewise, placing of the jacks is the biggest difference between this and the nine series TS. 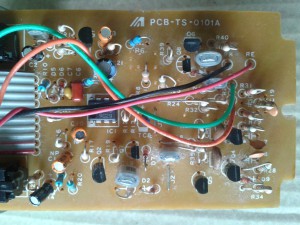 The photo above is taken after i modded other one of my taiwanese units. One with a keen eye should be able to catch all the components that have been swapped. Hint: original unit has 5% carbon film resistors and transparent mylar caps. Okay. I’ll let you know everything there is to know. The one resistor in the middle of the board is swapped from 220R to 0R. The inverting input components have been replaced – minimum drive setting up, more bass and more overall gain. Also the 51p ceramic cap is swapped for multilayer type. The two resistors on the bottom left are the two resistors that make this a TS9. Swapping all the mentioned values will result the circuit being transformed from TS10 to TS808 on steroids.

How does it sound?
As all the rest of the Tubescreamers. Without the mods it sounds pretty much 1:1 with TS9 and TS5. It can (and probably should) be modded into something that simply sounds way better. But still. In its heart it will always be just a tubescreamer. The sound i personally won’t ever be using for anything.