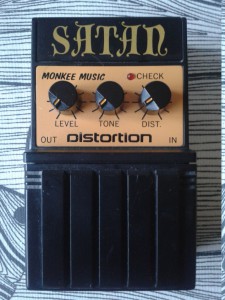 What is it?
Monkee Music Satan Distortion, made in japan in 1989.

Ok. It has super cool font saying “Satan” on it. It is made of plastic and it is apparently japanese 1:1 clone of  Rocktek DIR-1 Distortion. When i say it’s made of plastic, i do mean that. Even that the outer shell is made of cheapest materials possible, the insides are not that bad. There are couple other pros in it too. 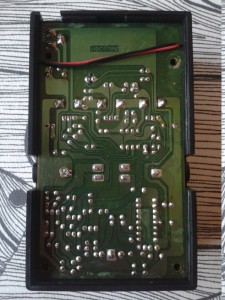 The board mounted jacks are held in palce with plastic holders, not completely unlike the older Yamaha box jack’s pull relief solution.  Which in my opinion is a nice method. This keeps the strongest pull/strain away from the jacks. As some of you may know, the plastic on plastic is better than metal on plastic. Traces have that japanese  clang to them and the soldering is solid and professional looking. 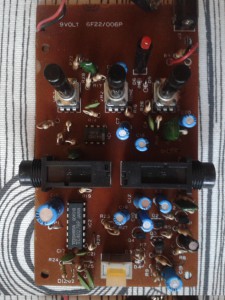 Components, excluding the momentary bypass switch seem to be all good. Even the switch doesn’t have any issues, but i do believe this unit has not seen much use in its existance. As the unit is 1:1 with Rocktek DIR-1 Distortion, there is a traced schematic up at Freestompboxes forum. Although you need to be logged in to see it. 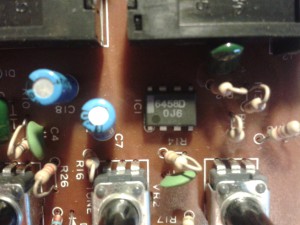 The main driver is 6458D, which is old Sanyo chip with some similarities to JRC4558. Sanyo model however is quite more high-end audio product. The datasheet is available online. I’m tagging this as “Other Brands”, as this unit is apparently only Monkee Music brand box ever manufactured.

How does it sound?
I’ve heard this type of distortions before. Below unity and basically just one tone you can get out of it. It’s not that bad of a distortion, but all the controls are pretty much unnesessary. You’ll need to have everything maxed to have a reasonable result out of  this box.  It’s that classic 80’s/90’s distortion sound that everyone is familiar. Relatively high gain. The lower than unity output level is the worst culprit in addition to weak plastic enclosure. Prime suspect for modding and /or rehousing. But for that – i’d suggest to get Rocktek DIR-01 as this Satan Distortion seems to be quite rare specimen.