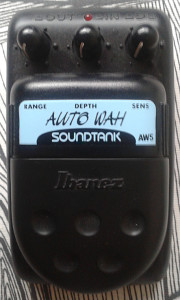 What is it?
Ibanez AW5 Autowah in plastic enclosure from later soundtank series. Made in taiwan around late 80’s.

This model has couple things that are unique. First of all, it is the only Soundtank with analog opto-isolator on board. The box and the component layout itself is quite neat. It’s pretty well made and placing high on build quality in the series.There is a schematic up at Dirk’s page. 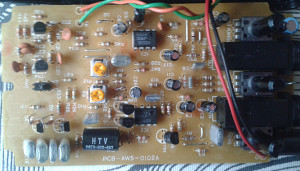 The schematic shows the basic signal path to be a buffer splitting the signal to bypass, modulation filter and the trigger part. The trigger part is close to something we’ve seen as a trigger in many other designs, like couple of EHX autowahs. It Includes half of an dual opamp and two diodes rectifying the triggered signal to two transistors which in part control the vactrol (or opto-isolator). The filter part is not too far off from WH10 and others. Then there is, of course, a output buffer and all the standard Ibanez electronic JFET switching components. All in all. Elegant design.

By the basic design, this should be very nice autowah. But is it?

How does it sound?
Sad. For obvious reasons one could have AF9 or AFL in mind once seeing this unit. It does not sound anything like the early 80s Ibanez perfection from 9- or Master series. It gets the job done, but overall it is sounding like a hollow, cheap thing. I may not be the greatest expert on autowahs, but i apparently have quite a few effect boxes from that genre. This one? Definitely not one of the greatest. Actually. One of the worst. You’re after a usable autowah in low price range? You should be looking at Dano French Fries instead. This one is much more of an nice novelty effect or a collector’s item than usable effect pedal.