What is it?
Morley DDB Diamond Distortion from so called “Jewel box” series. Made in US between 1995-98.

My passion for pedals and effects is something that i don’t quite understand myself. This series is perfect example. I seem to like stuff that may not be worth it. Morley is best known for their wahs and wah derivatives. But there are some non-rocker pedals in their back catalog too. The four units in the series all share the same project box. Thin, wide and very, very long. The measurements are far away from the sidelines, missing the ballpark completely when it comes to usability. The boxes take up a half of your pedal board, but they do look pretty cool otherwise. 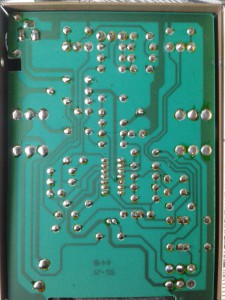 Spacious board layout shows that the same circuit could have been fitted in 1590B (or MXR-style) enclosure without issues, even using through hole components including 0,6W resistors and still there’s enough room for a battery slot. As with a few other Morley distortion designs, there is TL074 quad opamp and silicon diodes as clippers in the feedback loop of the main gain stage. Standard three controls of Level, Gain and Tone. Nothing too special in the design, just straight forward buffer -> gain stage -> recovery stage -> tone control -> buffer. The schematic is available at Morley’s site. The schematic says it’s “revised” and dates back to ’97. Wonder what, if any, differences there are between that document and the earlier one. 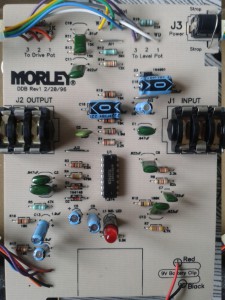 As the strip side picture of the board shows, the strips are a little wider than usual. The component side shows the massive room between the components without any symmetry or other visual candies.

As a side note – if you’re about to open your box up for any reason, keep in mind that the grounds for the left and right side of the board connect only through the weakest part of the board, between the battery hole of the PCB and the bottom end of the box. This is very stupid decision for the PCB design as the thin stripe of board can be easily broken. One can of course take a wire from jack ground to another to ensure that the box stays running for ever, even if that strip of board was to crack at some point due to opening the box up.

How does it sound?
Not bad overdrivish distortion. Not too great either. For your standard driven Marshall JCM900 sound, just turn the volume and tone to the max. It is usable, but with nothing special. The overall tone reminds me a lot of original MXR Dist+. The gain knob takes you from mildish overdrive to heavier overdrive. Other controls are pretty much useless. Nice novelty item as everything in a “jewel box” should be. It just doesn’t sound great enough to leave an impression. Talk about severe meh-factor.