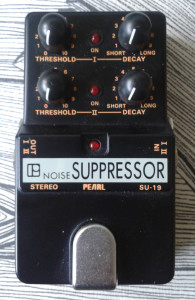 What is it?
Pearl SU-19 Noise Suppressor. Stereo noise gate, made in japan, early 80’s.

I’m not that sure if get the whole noise gate suppressor thing. I mean, what’s the idea? To use too many noisy and bad sounding designs in a chain, so that you’ll need a device to kill signal? Well. For me personally, the need is not there. I just happened to get a nice deal on this unit, so i though “why not”. Thanks to J. Lindén of Linden Guitars. Only bad thing is that the bottom rubber has gone missing something like 20 years ago. Su-19 has two channels that can be tuned one by one. This brought up another question, “why?”. After thinking about it for a second, the other channel can be used to kill the excess noise coming from the guitar and the second one to do the same for the signal that leaves the pedal board. Or other option would be to use one channel to tame the pedalboard noise from before the amplifier input and the other to tame the other units from amp’s effect loop. Either way, quite a cool idea. I do get the gates when used on drums when recording, but for the guitar? And two of them? Maybe i just haven’t been in need for high enough gains to understand that completely. 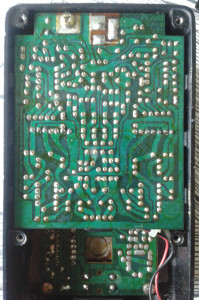 To take the box open, one needs to unscrew the battery door and six screws that hold the thick metal plate in place. The box then shows the board that is beautiful on more levels than one. Notice the symmetry for each channel on the board trace layout. 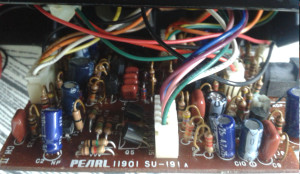 Japanese style crowded and thick board. Very crowded. Didn’t feel like ripping it all off, so you’ll just have live with this image of it. 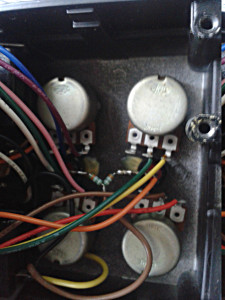 There’s even some point-to-point mojo near the pots. I would say that the unit is very well made. Just like all the other units in the Pearl series.

How does it sound?
Very silent on most settings. The controls let you dial the threshold and decay speed to exactly where you want them. The fade-out is smooth and when dialed to one’s liking, it’s barely noticeable. As noise gates come, this is very nice item with both, user and collector value.

Don’t you just love it when guitar gear never gets too old or obsolete?